It's no secret that dogs are man's best friend. And it's really no secret that they were bred for this purpose. The emergence of what we know as dogs happened through a process of wolf domestication, influenced by humans. What it comes down to is selective breeding - if the most friendly wolves (the ones most friendly to humans) start hanging around humans, and away from the rest of the pack, they're likely to only breed with each other and not the larger pack; keep repeating this process, involving the most friendly wolves and you end up with animals bred to be friendly with humans. In fact, dogs and humans evolved alongside each other, further strengthening the behavioral bond.

Back in 2015, there was a breakthrough in understanding how dogs emerged from wolves, when researchers from the Chinese Academy of Sciences (led by Ya-Ping Zhang) and Peter Savolainen of the KTH-Royal Institute of Technology in Sweden sequenced the genome of 12 gray wolves, 27 dogs from breed indigenous to Asia and Africa (where dogs are suspected to have first emerged from wolves), and 19 other breeds from around the world. The dogs of Asia were the closest genetic match to wolves, providing evidence that this is where dogs as a species first emerged. They also found that, though humans began breeding dogs about 33,000 years ago, they didn't really spread outside of Asia until 15,000 years ago.

Just a few days ago, the world learned of another breakthrough in understanding the dog genome, this time explaining why it is that dogs are so sociable. It apparently relates to a gene that has been linked to Williams-Beuren syndrome in humans - a disorder characterized by hyper-sociability:


A new study shows that some of the same genes linked to the behavior of extremely social people can also make dogs friendlier. The result, published July 19 in Science Advances, suggests that dogs’ domestication may be the result of just a few genetic changes rather than hundreds or thousands of them.

“It is great to see initial genetic evidence supporting the self-domestication hypothesis or ‘survival of the friendliest,’” says evolutionary anthropologist Brian Hare of Duke University, who studies how dogs think and learn. “This is another piece of the puzzle suggesting that humans did not create dogs intentionally, but instead wolves that were friendliest toward humans were at an evolutionary advantage as our two species began to interact.”

In the new study, [Bridgett] vonHoldt and colleagues compared the sociability of domestic dogs with that of wolves raised by humans. Dogs typically spent more time than wolves staring at and interacting with a human stranger nearby, showing the dogs were more social than the wolves. Analyzing the genetic blueprint of those dogs and wolves, along with DNA data of other wolves and dogs, showed variations in three genes associated with the social behaviors directed at humans: WBSCR17, GTF2I and GTF2IRD1. All three are tied to Williams-Beuren syndrome in humans.

The study is open access, so you can read the full-text here. 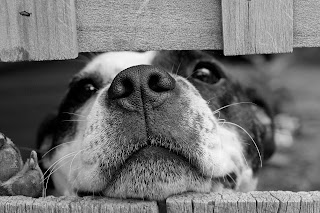