For today's Statistical Sins post, I'm doing something a bit differently. The source I'm discussing doesn't necessarily commit any statistical sins, but commits sins in how he reports research and the bias he shows in what research he presents (and what he doesn't).

The source is a blog post for Psychology Today, written by Dr. Lee Jussim, a social psychologist. His post, Why Brilliant Girls Tend to Favor Non-STEM Careers, discusses the gender disparity in the STEM fields and argues that there is no bias against women in these fields.

This is a subject I feel very strongly about, so I recognize I'm probably predisposed to take isue with this post. I'm going to try to be objective, even if the article is written in a "Cash me outside, howbow da?" kind of way. Which is why it's a bit hilarious that his guidelines for commenting include not "painting groups ith a broad brush" (which he does when he quips that 95% of people are a vulnerable group by social psychology definitions) and "keep[ing] your tone civil."

He gives a little attention to one study that refutes his argument, but sets it up as a straw man due to its smaller sample size compared to the studies he cites that support his argument. In fact, he gives a one sentence summary of that study's findings and little to no detail on its methods.

I could probably do a point-by-point analysis and rebuttal of his post. But for the sake of brevity, I will confine my response to three points.

First, he writes an entire post about gender disparities in STEM without once citing stereotype threat research, which not only could explain the gap, it could explain his key argument against bias - differences in interest. He doesn't even try setting stereotype threat research up as a straw man, though he likely could - new efforts in replicating past research (and in many cases, being unable to replicate said research) means that most key social psychology findings could be fair game for criticism.

As a reminder, stereotype threat occurs when a member of a stereotyped group (e.g., women) encounters a task about which their group is stereotyped (e.g., a math test) and underperforms as a result. Stereotype threat leads members of the group to disengage and deidentify from the task area. Hence, women exeriencing stereotype threat when encountering math will decide that they're just not a math person and they're better suited for other fields. I did my masters thesis on stereotype threat, which is probably the strongest version of mesearch I've conducted.

He doesn't even say the words stereotype threat once in the article. And he's a stereotype researcher! I highly doubt he is unaware of this area of research. But because it doesn't support his argument, it essentially doesn't exist in the narrative he's selling. As he says himself in the post:


What kind of "science" are we, that so many "scientists" can get away with so systematically ignoring relevant data in our scientific journals?

Second, his sole argument for the disparity in STEM fields is that men and women have different interests. That is, women are more drawn to non-STEM fields. But, as mentioned above, stereotype threat research could explain this observation. Women deidentify from math (and also the remaining STE fields) when encountering the frustration of stereotype threat. So, by the time we get to them in studies about subject matter interests, the stereotypes about gender have already been learned and in many cases, ingrained. Research on implicit bias shows that nearly everyone is aware of racial stereotypes, even if they don't believe in their accuracy themselves; the same is likely true for gender stereotypes.

So, okay, if women just aren't interested in the STEM fields, the question we should be asking is "Why?" What is causing this difference? Is it something unimportant, as Jussim believes? Or is it something as insidious as stereotypes? And would different practices with regard to teaching and career counseling help open women's options up to include careers in STEM?

Believe me, I'm not second wave feminist enough to believe that we should ignore choice and argue that women are brainwashed anytime they do something stereotype-compliant (yeah, I have a women's studies concentration, so knowledge of the different waves of feminism can creep out everyone once in a while), but I'm also concerned when women aren't given all the facts they need to make an informed choice. Now, to be fair, Jussim does offer one reason for the differences in interest, though there's issues there as well. Which brings me to...

There's a lot of wrong in that whole framework, so let me try to untangle it. Let's start with the verbal + quantitative = verbal career narrative. By his logic, being strong in both means women could go into a verbal-area career or a quantitative-area career. But why doesn't he discuss verbal + quantitative careers? There are many, including the career he is in as a social psychology researcher. In fact, there are few quantitative careers I can think of that don't require you to at least try to string two or more words together. Being good at both allows you to succeed even more in STEM jobs. In fact, as I think of some of the best-known scientists of today, they are all people who communicate well, and have published many books and/or articles. If I asked you to name STEM folks known by the public at large, you'd probably list some of the following people: Neil DeGrasse Tyson, Brian Greene, Stephen Hawking, Carl Sagan... All great writers. All fluent in STEM. All men.

True, I could be forgetting some of the big names of women in STEM, to sell my narrative. But these are the people I thought of off the top of my head. I'm struggling to think of women who are well known at large, though I can think of a fair number in my own field. Obviously, I remember my childhood hero, Marie Curie, the first woman to win a Nobel prize and the first person to win two in different fields. But if we could get more girls to be interested in STEM, show them that they have options to use their verbal skills as well, and also show them that they have role models of women in STEM (who preferably don't have to poison themselves to attain greatness - sorry, Marie), maybe - maybe - more will show an interest.

We do nothing by miscontruing what these jobs involve, such as the nonsense "working with things" versus "working with people" dichotomy. True, some jobs may be more thing-heavy or people-heavy, but there's never total isolation of the other side. And people who work in the STEM fields - especially people who want to be successful in STEM - absolutely work with people. And talk to people. And share findings with people. And even study people, so that people in a sense become their "things." As a social psychologist, Jussim should know better.

I'll be honest, I'm having a hard time understanding Jussim's need to so vehemently say there's nothing there. Either he is wrong, and if we stop believing there's something there, we stop doing anything to help it. Or I am wrong, and we've maybe wasted some research dollars and people's time. So what? And I swear to God, people, if I hear the "but reverse discrimination" argument against my previous statement, I'm going to scream.

In conclusion, Jussim's sins are omission and some logical fallacies. My sins are probably the same. Hopefully between these two posts, there's some balance. 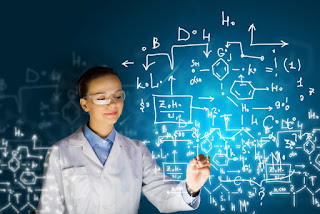