Walter Mischel was an important figure in the history of psychology. His famous "marshmallow study" is still cited and picked apart today. Earlier this week, he passed away from pancreatic cancer. He was 88:


Walter Mischel, whose studies of delayed gratification in young children clarified the importance of self-control in human development, and whose work led to a broad reconsideration of how personality is understood, died on Wednesday at his home in Manhattan. He was 88.

Dr. Mischel was probably best known for the marshmallow test, which challenged children to wait before eating a treat. That test and others like it grew in part out of Dr. Mischel’s deepening frustration with the predominant personality models of the mid-20th century.

“The proposed approach to personality psychology,” he concluded, “recognizes that a person’s behavior changes the situations of his life as well as being changed by them.”

In other words, categorizing people as a collection of traits was too crude to reliably predict behavior, or capture who they are. Dr. Mischel proposed an “If … then” approach to assessing personality, in which a person’s instincts and makeup interact with what’s happening moment to moment, as in: If that waiter ignores me one more time, I’m talking to the manager. Or: If I can make my case in a small group, I’ll do it then, rather than in front of the whole class.

In the late 1980s, decades after the first experiments were done, Dr. Mischel and two co-authors followed up with about 100 parents whose children had participated in the original studies. They found a striking, if preliminary, correlation: The preschoolers who could put off eating the treat tended to have higher SAT scores, and were better adjusted emotionally on some measures, than those who had given in quickly to temptation.

Walter Mischel was born on Feb. 22, 1930, in Vienna, the second of two sons of Salomon Mischel, a businessman, and Lola Lea (Schreck) Mischel, who ran the household. The family fled the Nazis in 1938 and, after stops in London and Los Angeles, settled in the Bensonhurst section of Brooklyn in 1940.

After graduating from New Utrecht High School as valedictorian, Walter completed a bachelor’s degree in psychology at New York University and, in 1956, a Ph.D. from Ohio State University.

He joined the Harvard faculty in 1962, at a time of growing political and intellectual dissent, soon to be inflamed in the psychology department by Timothy Leary and Richard Alpert (a.k.a. Baba Ram Dass), avatars of the era of turning on, tuning in and dropping out. 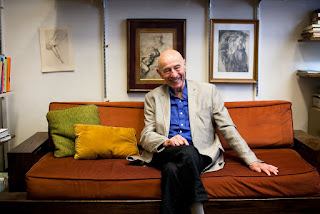 This is a great loss for the field of psychology. But his legacy will live on.
by Sara at 11:20 PM