As I've mentioned before, I try to avoid being political online. I see no issue with declaring a stance on important issues, like ensuring strong funding for scientific research, but shy away from sharing my opinion in partisan politics. That being said, I have not tried to hide my opinion on Trump, whose candidacy frightens me. And my thoughts about what he would be like as president range from launching Twitter assaults on anyone who dares criticize him to committing war crimes (if he did, in fact, follow through on past comments that to fight terrorism, you have to go after their families).

Fortunately, I'm not the only one frightened by the prospect of Trump winning the election. And even people and organizations that generally back Republicans are endorsing other candidates. For instance, the Cincinnati Enquirer, which has traditionally backed GOP candidates, just endorsed Hillary Clinton:


The Enquirer has supported Republicans for president for almost a century – a tradition this editorial board doesn’t take lightly. But this is not a traditional race, and these are not traditional times. Our country needs calm, thoughtful leadership to deal with the challenges we face at home and abroad. We need a leader who will bring out the best in all Americans, not the worst. That’s why there is only one choice when we elect a president in November: Hillary Clinton.

The compliments of Clinton are, unfortunately, sometimes backhanded in this editorial. For instance, this is how they start the editorial:


Presidential elections should be about who’s the best candidate, not who’s the least flawed. Unfortunately, that’s not the case this year.

They call Clinton arrogant and unwilling to admit wrongdoing. Never mind the fact that Trump will say something horrible, then deny he ever said it, even when people show him videos or tweets as evidence. But they do offer some genuine praise of Clinton, calling her competent and inclusive, with strong diplomatic skills. This endorsement could be big for Clinton, considering Ohio is a battleground state. 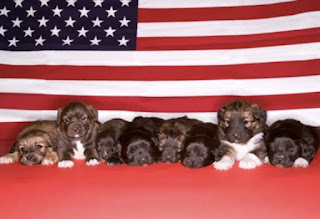 Need a break from politics? I've created the Puppies Not Politics page on Facebook, where I share puppy pictures for each political post I see - head on over to for more adorable puppies!
by Sara at 9:23 AM