From Behind the Zion Curtain

Thanks to The Daily Parker, I learned about this interesting article on the relationship between craft breweries per capita and religiosity by state - that is, states with more people identifying as "very religious" have fewer craft breweries, per capita, which they demonstrated with this lovely graph: 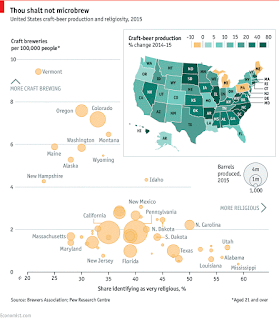 
Local regulations determine the level of production much more than demographic characteristics such as income or education, says Bart Watson, chief economist of the Brewers Association, a craft-beer trade organisation. And religious legislators may get a bit overzealous. Utah, a state populated with many teetotaling Mormons, strictly limits the strength of draught beers and cocktails. Bartenders in the state must also mix drinks behind large barriers called “Zion curtains” (for the sake of the children, of course). No surprise then that it appears not to have caught on to the craft-brewing craze.