I've always avoided being political online - in part because I'm a government employee and in part because I prefer political discussions to be more private and between a few individuals - but I'm sure I'm not alone in expressing some strong fears about the messages coming from a particular Presidential candidate. I couldn't say it better than Ezra Klein, so I'll let him do it:


I'm sure I don't have to explain to you, dear reader, that nationalism is a scary and dangerous thing. This term has been used to describe many of the most terrifying leaders in history. But another term is often thrown around during Presidential elections to describe candidates positively: patriotism.

The distinction between these two concepts is not always clear, and some may conflate the terms. But research suggests they are distinct concepts, although there can be a correlation between the two.

Linda Skitka, who studies political ideology (among other topics) defined these concepts as follows:

Patriotism is "love of country and attachment to national values."

Nationalism, on the other hand, is "uncritical acceptance of nation, state, and political authorities combined with a belief in superiority and dominant status of one's nation."

These concepts can be linked to concepts in intergroup relations research. I've blogged about these topics before, but for a brief reminder, people naturally assign themselves and others to groups. The particular groups one assigns themselves and others to depend strongly on the situation, and what characteristics are made salient. And it doesn't take much for people to begin grouping themselves with similar others (our in-group) and dissimilar others (our out-group), a concept known as the minimal group paradigm.

We are inclined to evaluate our in-group positively, because it allows us to experience a boost in our own self-esteem through our association with in-group members. We call this in-group favoritism. We may also evaluate our out-group negatively, once again to boost our own self-esteem (through downward social comparison) and rationalize why we prefer to belong to our in-group and not the out-group. We call this out-group derogation.

But it's important to point out that you can have one without the other. That is, it isn't necessary to tear another group down to build ourselves up. And that is where the distinction between patriotism and nationalism becomes very important. It is entirely possible to love one's country without also hating another country. And research supports the notion that people can hold positive attitudes toward the in-group without any influence on attitudes toward the out-group.

There are also other factors that can impact (or moderate) these outcomes. For instance, people who identify highly with the in-group and who perceive high levels of intergroup conflict are more likely to ascribe opposite characteristics to members of the out-group (known as out-group contrast). So messages that highlight conflict between other nations could turn patriotism into nationalism, if those messages resonate with the individual.

I'm certainly not telling people to avoid being patriotic. It's fine to love one's country, and it's also possible to love one's country while also recognizing its flaws. But it's important to recognize where those feelings should end - prior to derogating other countries. I strongly believe that knowledge is power - one of the reasons I write this blog - and it is my hope that acknowledging the differences (and similarities) between these two concepts will help people to recognize when patriotism can turn ugly.

And now, because I've done a lot of talking about politics, I leave you with a puppy. 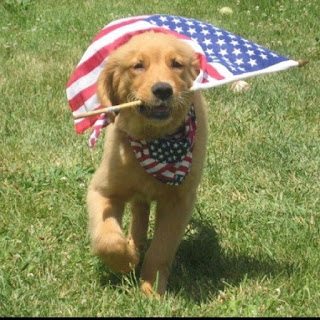