It’s no secret that I love social psychology. I’m constantly fascinated by new findings, as well as the classics, that help us to understand human behavior. At the same time, some findings show the dark side of human behavior, and show that even the most inclusive, open-minded person may possess attitudes they would not consciously agree that they hold.

True, this is just one recent study. But the finding, and the methods, have long been established. Early work by Gordon Allport, who in a sense wrote the bible on prejudice, actually started as the study of rumor. His study 1947 study with Leo Postman involved a drawing of a well-dressed African-American man speaking with a Caucasian man who is holding a razor. 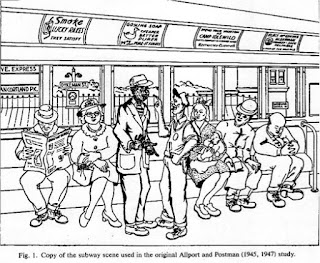 Though the results of the study are often misreported, in some trials of the study, where participants were asked to identify the individuals involved before recalling the events, a little over half of participants misremembered the razor being in the African-American man’s hand instead.

Allport continued in this line of work, postulating that prejudice originates from people’s need to generate categories in order to quickly understand others and navigate the social world. In fact, placing groups of people in mental “buckets” along with certain traits and characteristics is how stereotypes get started to begin with.

Even people who don’t necessarily believe stereotypes are true are aware of stereotypes about certain groups, and these stereotypes can be automatically activated in the presence of group members. This research was pioneered by social psychologist, Patricia Devine, who established that stereotype activation is automatic, and it takes conscious effort to downplay those stereotypes and keep them from influencing our behavior. (Read the original paper here.) Recently, Devine also suggested that ‘gaydar’ is actually the use of stereotypes to infer a person’s sexual orientation.

Which brings us to where we are today. The important thing about Todd, Thiem, and Neel’s study is to demonstrate that, not only do people recognize weapons more quickly when associated with African Americans instead of Caucasians, but that this effect is true even with 5-year-old children. Obviously there are many important implications of this research. The question, then, is what do we do about it?
by Sara at 8:47 PM