On Gambling and Good Moods

The lottery has received a lot of attention recently, due to an obscenely large jackpot of $1.3 billion. Obviously, many people bought tickets for the drawing - more than usual - as happens with large jackpots. But recent research identified another reason for increases in lottery ticket sales: an unexpected sports win.

The authors found that when a sports team won a game they were predicted to lose (using a metric they called prediction error: 1-the probability they will win the game), lottery sales increased - by as much as $160,000 in fact, for a day with several unexpected victories. The same was true for unexpectedly sunny days - days when the weather person predicted clouds or rain. 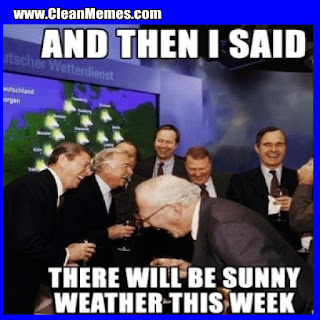 Read the abstract here for more information on the study and authors.

There has already been a long history of research into the impact of the external environment on mood and satisfaction with one's life. A study by Schwartz and Clore, using phone interviews, found that on sunny days, people reported being more satisfied and happy with their lives and on rainy days, people were less satisfied and happy. But, if you made people aware of the nice weather, such as by asking "How's the weather today?", the "rainy day" ratings looked more like "sunny day" ratings.

Essentially, what is happening here is that people are misattributing the source of their good mood - they think it's the circumstances of their lives when it is actually the weather. But how does this lead to increased lottery sales?

Before I get into that, I think I should quickly differentiate between a couple of psychological terms: mood refers to an emotional state without a clear source (either you're unable to identify it or you've forgotten what it is), while an emotion has a clearly identifiable source. Making people aware of the source of the emotional state (good weather) can change a mood to an emotion.

This is important, because moods can have a strong impact on our decision-making - more than emotions, because we can try (not always successfully) to counteract the impact of emotions on decisions. That is, if I'm angry at person X (and know it) and make a decision about person Y, I can try not to let my anger toward X affect my behavior toward Y. But if I'm angry at X but don't realize it, and I'm instead in a bad mood, that will definitely impact my decision about Y; I may misattribute my mood to Y.

But it's not just that mood influences how we look at people or things - it also influences how much thought we put into a decision. We call this the "mood as information" effect (read more here). When we're in a positive mood, we essentially say "everything is good as is, keep doing what you're doing." When we're in a negative mood, it's a sign that "something is wrong; better figure out what is is."

So if we're in a good mood because of the weather or a sports victory, and we were thinking of buying a lottery ticket, we may do that without much additional thought. That is, we may misattribute the source of the good mood and think of it as a sign that buying that lottery ticket is a good idea. But if we're in a bad mood, we may be more likely to systematically think about whether buying that lottery ticket is a good idea. And considering the probability of winning, it almost never is.
by Sara at 12:11 PM