Congratulations, everyone - we've made it to 2016! Hopefully you had a wonderful celebration bringing in the new year and did exactly what you wanted to do - whether that's going to a party or staying home for a quiet night.

The new year is an exciting time because for many, it is seen as an opportunity to start over. To make changes from what we didn't like about the previous year and move toward self-improvement. One way we do this is in the form of New Year's resolutions. 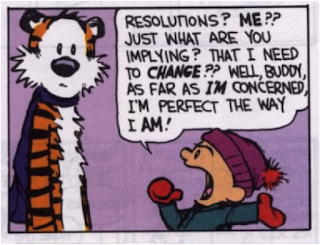 Research (by Norcross, Mrykalo, & Blagys, 2002) suggests that almost half of Americans make a New Year's resolution, with the most frequent being: weight loss, exercise, and smoking cessation. Unfortunately, the same research suggests that we have a lot of difficulty maintaining these resolutions.

No, seriously, a lot. 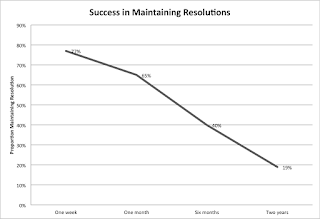 Norcross and colleagues found that after one week, only 77% of people who had made a New Year's resolution had stuck with it. By the two year mark, only 19% had stuck with their resolution - mind you, these resolutions are usually lifestyle changes that people would expect (hope) to be permanent. When a person resolves to, say, quit drinking, they don't usually mean for just a few days.

Why are people who voluntarily make a New Year's resolution - I mean, it's unlikely someone put a gun to their head and forced them - so bad at sticking with it?

As a recovering behaviorist, I can tell you there are a variety of factors at play. Most importantly, behavior change isn't easy. If it were, Americans wouldn't be spending almost $10 million a year on self-help books and programs. And they certainly wouldn't be spending $90 billion on alcohol each year, nor would we have over 260 billion cigarettes purchased each year, in the US alone.

There are a variety of influences on our behavior. Some are internal, involving our feelings and thoughts, like motivational states, or cravings and physiological reactions. Others are external, which can include reactions by others, or something more concrete, like money. Successful behavior change involves targeting both types of influences. For instance, a person who wants to quit smoking not only needs to feel strong motivation and figure out ways to handle cravings and withdrawal symptoms, they may also need to make changes to their environment, even changing who they associate with and settings in which they socialize.

Changing a behavior, too, requires a combination of internal and external motivators, though internal motivators tend to be stronger. Why? Because external reinforcers of behavior, like money, food, or even praise from others, lose their effectiveness over time. Receiving $5 when you have nothing is lot more rewarding then receiving $5 when you already have $100 accumulated. Being given tasty food when you're hungry is more rewarding then being given tasty food when you're full. And so on. As the old joke goes, it may only take one psychologist to change a light bulb, but the light bulb has to want to change.

People may also set goals without really thinking about the specifics about that goal and how to get there. One thing behaviorists encourage is for people to set SMART goals: specific, measurable, attainable, realistic, and time-sensitive. I may resolve to exercise more, but lose steam because I don't have the specific details about what I mean by that. If I don't sit down and determine those details, it will be difficult, maybe even impossible, to get started.

On the other hand, if I resolve to exercise 30 minutes a day, three times a week, I have something to work with. True, there's more I need to figure out, like, "Is that goal realistic with my schedule?" or "What kind of exercise?" or "How long should I give myself to work up to that level of exercise?". But even before I figure out those issues, I already have something specific and measurable.

Whatever the goal, there are multiple programs and interventions that can help people reach it. However, another problem people run into is that some (maybe many) programs aren't based on strong science. So people may jump on a particular bandwagon without doing their homework to learn whether that bandwagon actually works. This is likely another reason for the high attrition in maintaining resolutions. Doing that homework requires a certain level of scientific literacy, but probably a good mindset to start with is, if it sounds too good to be true (Quit smoking in 3 days! Lose 10 pounds in a week!), it probably is.

When I taught Learning & Behavior at the undergraduate level, I had my students complete a behavior modification project, in which they identified a behavior they wanted to change and spent the semester applying the topics they learned in class to changing it. Students seemed to enjoy the experience, and many were successful. Those who weren't reported that they had made some positive changes, and now had the tools (and hopefully motivation) to keep working. Too bad I can't follow-up now and see how many are still successful!

What about you, dear reader? Did you make a New Year's resolution? If not, no worries. You're awesome! If so, I wish you all the luck and simply ask that you consider some of the things I've shared to help you get there.