Movie and TV Tropes, Constellations, and A Chance of Meteors

I started thinking last night of all the movies and TV shows that contain cutesy scenes about pointing out Cassiopeia. Or any constellation, really, including made-up ones. Just a few scenes I could think of...

I've never been particularly good at identifying Cassiopeia or most constellations. My favorite constellation is Orion, which you can see during the winter. It's very recognizable and bonus: one of the stars is a red supergiant named Betelgeuse.

Of course, last night, being able to identify Cassiopeia became important. I decided to watch the Perseid meteor shower, which occurs every year in late July to mid August. It is so-called because the meteors appear in the sky near the constellation of Perseus, which is close to Cassiopeia; in fact, an article I read said to find Cassiopeia, then find Perseus, then enjoy meteoric goodness. 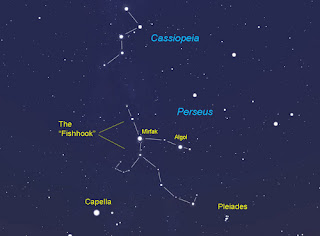 It also said look Northeast. So I looked Northeast. I might have found Cassiopeia. Meh, who knows?

The best time to watch this meteor shower is in the hours before dawn. Since I am usually dead to the world at that time, I opted instead for late evening. This is the time to catch earth-grazers, meteors that graze the earth's atmosphere and leave a long trail as they burns up. I saw two, including one really spectacular one that went across the sky.

This is only my second meteor shower and the first one I witnessed on purpose. The first was serendipitous. I was driving in Kansas City, my old stomping grounds, when I saw a light fall from the sky. I thought, "Cool, meteor." Then I saw another, and another... I can't remember when this was, but I remember the sight.

I'm hoping to watch again next year and maybe even try to make early morning my viewing time. Obviously, staying up until dawn is much more fun than waking up early. So preferably not a work day. Bonus if I can get away from Chicago and the light pollution to do it.

Earth-grazingly yours,
~Sara
by Sara at 6:44 PM