Don't Think About That: Chicken Sandwiches, White Bears, and Coping with Unwanted Thoughts

This may be thanks in part to the strong influence of early behaviorists, who could only study behavior that was outwardly expressed (rather than "internal" behaviors, such as thought), and therefore took the radical perspective that activities within the brain are irrelevant, and perhaps even nonexistent. (The founder of radical behaviorism, B.F. Skinner, who I've blogged about many times, once likened cognitive psychology to creationism.) However, nonconscious processes are key concepts throughout psychology, because so many influences on people occur outside of their awareness.

I also talked in that post about when and where I get some of my best ideas - at night, often following a dream. Another place is in my car. This is not a good place to write down an idea necessarily, but I've recently begun using my voice-to-text feature on my phone to jot down thoughts, even full paragraphs, for whatever I'm writing. Recently, after having a bit of writer's block at my work computer, I was able to finish a paper I was working on during my drive home.

Today, as I was listening to the radio, I heard a commercial for Wendy's spicy chicken sandwich. While this may seem a strange inspiration for a blog post, I really enjoyed the announcer insisting that we not think about that tasty sandwich, because it reminded me of a couple of social psychological concepts I used in my dissertation research: thought suppression and ironic processes. These two concepts basically amount to the same thing with one key difference: conscious versus unconscious.

Or sex. Or a white bear having sex. (That was my intro psych professor's favorite example, so you can thank him for that image. Thanks, Dr. Flaherty!)

Or my favorite example: Don't look down. Really. Don't do it. People say this all the time, at least in movies, and the first thing the character does after hearing it is look down. 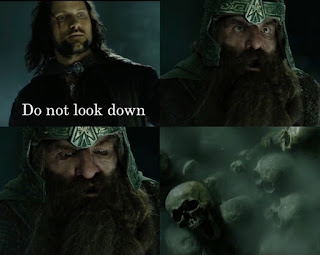 So why does this happen? Why does being told - or even telling yourself - to ignore something make you think about it more? As I said before, there are two potential explanations.

Ironic process theory states that when people are told to ignore certain information, two types of mental processes are activated. The first type, conscious processes, aims at reaching the desired mental state, by thinking about what the person has been told to think about (e.g., looking up). The second type, unconscious processes, monitors thoughts on the undesired mental state, by looking for thoughts on what the person has been asked to ignore (e.g., do not look down). In trying to not think about something, the person ends up thinking about it more, without even realizing it.

Thought suppression occurs when a person actively (consciously) tries to suppress a particular thought (e.g., do not think about looking down), causing the thought to become more prominent, especially if the information elicits strong emotions. In both of these cases, the individual is trying to avoid thinking about something, but ironic processes are unconscious while thought suppression is conscious.

These effects obviously have significance beyond "not looking down" or trying not to think about a tasty sandwich. They explain any number of intrusive thoughts: Worry. Fixating on life problems. Obsessing over an ex-boyfriend. Telling yourself not to think about it can often backfire. And if the issue is something that makes you very upset, the effect is even stronger.

So what works? There are a variety of methods, and which works best depends on the nature of the thoughts. If the thoughts are about a problem, think about whether it can be solved. If so, work on a plan for how to solve them and focus your mental energy on that. Then focus on carrying out the plan.

If there is no solution, or the potential solution is not adaptive (e.g., dealing with obsessive thoughts about an ex by trying to get back to together), the focus should instead be on coping and lessening the strong emotions associated with the thoughts. Distractions that take up mental energy in a positive way also might help. Talking to someone, especially a psychologist or social workers, can help you work through your feelings and identify patterns that make the thoughts more likely to occur.

More serious problems with unwanted thoughts might be a sign of an anxiety disorder, and talking to a psychologist or social worker, as well as potentially a psychiatrist for anxiety medications, might be a good idea. The indicator of whether something is a serious mental health issue is if it interferes with daily life. If the intrusive thoughts keep you from doing your job, paying attention in school, or maintaining relationships with friends and family, that's a sign that you should seek help.

Everybody experiences unwanted thoughts. Some are merely annoying, some are more serious. And it takes a lot more than telling yourself, or someone else, not to think about those things to stop them. Talk to someone. Start a blog. Or maybe just let yourself have that chicken sandwich.