Darrow and Bryan Face Off Once Again

You may remember the Scopes trial of 1925, in which Clarence Darrow defended science teacher John Scopes, who was accused of illegally teaching evolution to his students. Though the State of Tennessee, represented by William Jennings Bryan, won that case, Scopes's verdict was overturned on a technicality.

A statue of Bryan was placed outside the Rhea County Courthouse in 2005. 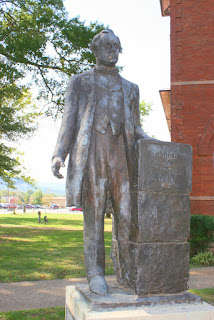 Now, funds are being raised for a Darrow statue to join Bryan's:


Bill Dusenberry, an Americans United activist in Oklahoma, told Tulsa World last year he was spurred to raise support and funds for a Darrow statue to join Bryan’s after a visit to Dayton in 2009. (See “Darrow In Dayton?” September 2016 Church & State.)

“It was obvious to me when I saw that he was not represented, that I needed to do my best to do something about it,” Dusenberry told the newspaper.

Philadelphia sculptor Zenos Frudakis told the Chattanooga Times Free Press that he plans to install his Darrow statue on July 13. A dedication will be held July 14, the day the Scopes Trial Play and Festival begins.