As I conduct some analysis for a content validation study, I wanted to quickly blog about a fun plot I discovered today: ggpairs, which displays scatterplots and correlations in a grid for a set of variables.

To demonstrate, I'll return to my Facebook dataset, which I used for some of last year's R analysis demonstrations. You can find the dataset, a minicodebook, and code on importing into R here. Then use the code from this post to compute the following variables: RRS, CESD, Extraversion, Agree, Consc, EmoSt, Openness. These correspond to measures of rumination, depression, and the Big Five personality traits. We could easily request correlations for these 7 variables. But if I wanted scatterplots plus correlations for all 7, I can easily request it with ggpairs then listing out the columns from my dataset I want included on the plot: 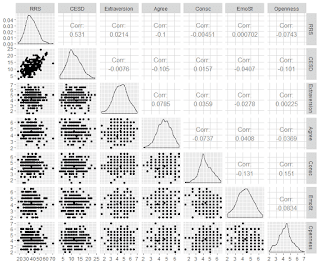