I stumbled upon this great post from the Personality Interest Group and Espresso (PIG-E) blog about which is better - Likert scales (such as those 5-point Agree to Disagree scales you often see) or Yes/No (see also True/False)? First, they polled people on Twitter. 66% of respondents thought that going from a 7-point to 2-point scale would decrease reliability on a Big Five personality measure; 71% thought that move would decrease validity. But then things got interesting:


Before I could dig into my data vault, M. Brent Donnellan (MBD) popped up on the twitter thread and forwarded amazingly ideal data for putting the scale option question to the test. He’d collected a lot of data varying the number of scale options from 7 points all the way down to 2 points using the BFI2. He also asked a few questions that could be used as interesting criterion-related validity tests including gender, self-esteem, life satisfaction and age. The sample consisted of folks from a Qualtrics panel with approximately 215 people per group. 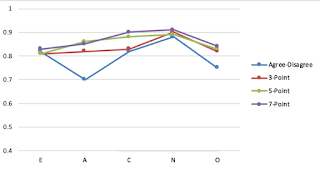 And here's what they found in terms of validity evidence - the correlation between the BFI2 and another Big Five measure, the Mini-IPIP: 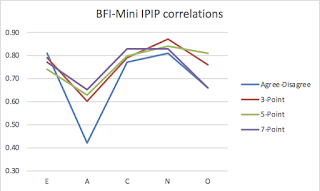 FYI, when I'm examining item independence in scales I'm creating or supporting, I often use 0.7 as a cut-off - that is, items that correlate at 0.7 or higher (meaning 49% shared variance) are essentially measuring the same thing and violate the assumption of independence. The fact that all but Agreeableness correlates at or above 0.7 is pretty strong evidence that the scales, regardless of number of response options, are measuring the same thing.

The post includes a discussion of these issues by personality researchers, and includes some interesting information not just on number of response options, but also on the Big Five personality traits.
by Sara at 3:23 PM