A friend and fellow writer commented on Facebook that she regularly teaches this essay: On Keeping a Notebook by Joan Didion. Since I've never read it, I decided to hunt it down. You can read it yourself here.

Didion shares how she uses her notebook and why it's been so useful for writing and understanding her own life:


The impulse to write things down is a peculiarly compulsive one, inexplicable to those who do not share it, useful only accidentally, only secondarily, in the way that any compulsion tries to justify itself. I suppose that it begins or does not begin in the cradle. Although I have felt compelled to write things down since I was five years old, I doubt that my daughter ever will, for she is a singularly blessed and accepting child, delighted with life exactly as life presents itself to her, unafraid to go to sleep and unafraid to wake up. Keepers of private notebooks are a different breed altogether, lonely and resistant rearrangers of things, anxious malcontents, children afflicted apparently at birth with some presentiment of loss.

How it felt to me: that is getting closer to the truth about a notebook. I sometimes delude myself about why I keep a notebook, imagine that some thrifty virtue derives from preserving everything observed. See enough and write it down, I tell myself, and then some morning when the world seems drained of wonder, some day when I am only going through the motions of doing what I am supposed to do, which is write — on that bankrupt morning I will simply open my notebook and there it will all be, a forgotten account with accumulated interest

I've kept a notebook for a long time, in which I write down random observations, ideas for blog posts, lines for stories (even if I have no idea where they go or what they refer to, but a combination of words that catch me as particularly beautiful, profound, or silly), and funny conversations I overheard - a favorite is a conversation in which one person insisted she hated fruits and the other person said that, because she has not tried all fruits, she can't categorically say she hates fruits, only the ones she's tried.

I recently started carrying a notebook with me again, and I made sure to print off a copy of Didion's essay to add to it. I also have random bits typed into my phone, which is great for when I'm on the go and need to talk-to-text something, but there's something really nice about writing things down on paper. 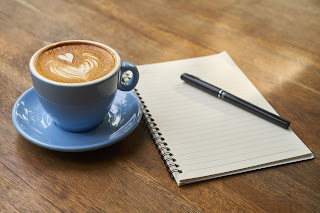