On Caitlyn Jenner, Gender, and Belonging

Bruce Jenner recently underwent surgery and treatment to transition to being a woman, now going by the name Caitlyn. 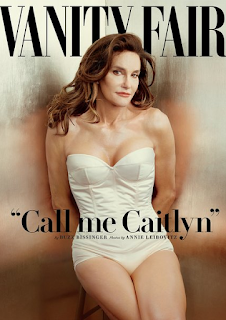 Numerous people have responded, some positive, some negative. I have mostly stayed out of these discussions, but a few recent posts making their way around Facebook have made it difficult for me to keep quiet about my views on this issue.

Two posts, in particular, sparked a strong negative reaction from me - so strong, in fact, that I had to close my laptop and walk away. I do not want to give these posts any more attention than they've already received, so instead of linking to them, I'll summarize.

One was written by a woman who had breast cancer. While I certainly empathize with how difficult that must have been, she used this story as a way to define womanhood - traits, she insists, she has and Caitlyn Jenner does not. She describes being a single mom - once again, something I can imagine wasn't easy. She also repeatedly and incorrectly used the term female.

We briefly interrupt this blog post for a public service announcement: female is an adjective, woman is a noun. We now return to your regularly scheduled blog post.

She signs her post, which was addressed directly to Caitlyn, "a real woman." I hope you're rolling your eyes as much as I was (and still am).

The second was even more infuriating. She goes so far as to call Caitlyn's statement that she "identifies as a woman" offensive. She proceeds to list out all of the factors that make a woman a woman, including many references to getting married and having multiple children - dealing with morning sickness and other unpleasant symptoms during pregnancy and in one case, giving birth to a 10 lb baby without drugs.

I have to admit, I laughed out loud when she said Caitlyn's statement was offensive. This woman is too busy distributing woman cards (to those she deems worthy) and giving herself a big pat on the back to even notice how her narrow definition of womanhood is biased by her own experience and values. Let alone how much her statement excludes others.

Let's dissect Caitlyn's statements that had Real Woman and World's Greatest Mom (and these two will now be referred to as RW and WGM, respectively) so offended. Caitlyn says, "I identify as a woman." There is nothing in that statement that excludes others. As with a recent post I read examining the "Black Lives Matter" movement, there is an implicit "too" in this statement. Caitlyn isn't calling into question who else gets to call herself a woman. She isn't outlining the basic prerequisites for someone to call herself a woman. The statement is, essentially, "I identify as a woman too."

Caitlyn asks that we address her as "her," not "him." Again, nothing in that statement excludes other women. Regardless of how you feel about gender reassignment, the least we can do is call people what they want to be called, right?

Part of the venom behind these attacks on Caitlyn, who simply wants to be recognized as part of a group with which she identifies, is likely a misunderstanding of the difference between (biological) sex and gender.

Sex is at the chromosomal level, which results in the development of internal sex organs. While the so-called sex hormones are typically associated with men (testosterone) or women (progesterone and estrogen), both sexes possess these hormones, at differing levels.

Yes, there are physical aspects associated with womanhood, though many of those aspects vary a great deal from person to person. Breasts, for example: not all women have large or even noticeable breasts, and men can also grow breasts for a variety of reasons. In fact, although rare, men can also get breast cancer. Having, and losing, breasts does not a woman make.

Gender, on the other hand, is a social term, referring to the concepts of masculinity and femininity in society. By interacting with others, we learn behaviors and traits associated with being a man or woman. Not only is womanhood socially constructed, it is also culturally influenced. The idea of what is a "woman" in Western cultures differs markedly from the idea in Eastern cultures.

And the differences can become even more nuanced and further subdivided by looking at smaller and smaller populations and groups. In fact, the posts by RW and WGM - while there are references to biological notions of womanhood, such as pregnancy - are strongly biased toward social (behavioral) notions of womanhood.

And even the ability to become pregnant shouldn’t define womanhood.

Does being incapable of getting pregnant mean you aren't a woman? Does consciously choosing not to have children mean you aren't a woman? What happens then to women who go through menopause and are no longer able to get pregnant - do they stop being women? As a (thus far) childless woman (and a friend of many childless women), I find that far more offensive than RW and WGM should find Caitlyn's statements. While I would like children someday, I recognize that for many women, this isn't that important to them.

And it doesn't have to be. In fact, insisting that pregnancy be a component in the definition of woman is simply dialing back the clock to a time when the only contribution a woman could make to our society was reproducing. When her worth was determined by her ability to bear healthy (and in some cases, emphasis on male) children. A time countless women and men have worked hard to move away from.

If RW and WGM had simply written posts about being women and the traits and characteristics that make them feel like women, that would have been fine. It's fine to be proud that you've given birth to three beautiful children and that you aspire to be a great mom. It's fine to be proud that you didn't let breast cancer beat you. Or that you raised a child on your own. I think most women would happily gather around and listen to other women's stories of strength.

But why must these declarations of pride take a backseat to excluding someone you don't want at the woman table? Being a woman is hard. We should find our strength through each other. Not by knocking others down.