Pachelbel and Queen: The Psychology of Music Cravings

Cravings; everyone gets them one time or another. Food cravings make sense (well, some of them). Your body often craves what it needs more of, though apparently some cravings for one thing (e.g., sugar) are actually a sign your body is lacking something else (e.g., magnesium). And while your taste buds may be fooled (Mmm, thanks for that Diet Coke, sweet nectar of life), your body is not (Artificial sweetener? Nice try, I still want sugar) (which some research suggests is why drinking diet soda doesn't actually help if you're trying to lose weight).

But today, I experienced another craving, one I've had before but never really considered until now. I found myself craving certain music. As I was listening to one album (Rachmaninoff's All Night Vigil, admittedly, one I've been listening to a lot recently because my choir will be performing it) I found myself craving (for lack of a better word) another work, Carmina Burana, different in style, instrumental support, and subject matter: While Rachmaninoff is a series of a cappella songs based on chants from the Eastern Orthodox tradition (read: quite religious), Carmina Burana is a celebration of sex, drugs, and rock n' roll (well, perhaps not rock n' roll, but the other two most definitely), and of course, fortune. One of the most well-known works from Carmina Burana is "O Fortuna", a piece you've definitely heard; it's often used in advertisements, even though the lyrics "O fortune, like the moon, you are changeable…" are perhaps not well-suited for the car, movie, football game, etc., ads I constantly see it used in. But people keep using it because it sounds epic - like you're talking about something really important and awesome. Well, it does if you don't understand Latin. But I digress.

Read a list of popular culture uses of O Fortuna.

Obviously, when you crave food, it fulfills a bodily need; even if the food you crave isn't all that good for you (And really, are any food cravings for things that are actually healthy? I don't know about you, but I rarely crave carrots.), it still provides calories your body needs to run all of its systems. In fact, pretty much any craving you can think of fulfills a survival need of some kind. But what need does music fulfill? Apparently, I'm not the only one who has considered this question. There are textbooks, articles, and even whole scholarly journals devoted entirely to the psychology of music. Researchers have examined how music preferences relate to personality, the factors that explain why someone likes a particular piece of music, and how music affects mood, to name a few.

Even researchers outside of music psychology recognize the power of music to influence your mood. One of the most popular manipulations for studies on the effect of mood is to have participants listen to a piece of music known to elicit certain feelings: happiness, sadness, etc. But research directly on music is far more rare (but becoming more common thanks to all these great publication outlets). Peter Rentfrow and Sam Gosling, two personality researchers who also frequently examine music in their work, noted in this article that of the 11,000 articles published in top social and personality psychology journals between 1965 and 2002, music was an index or subject term in only 7. The few studies on these topics find that music is related to personality (such traits as sensation-seeking - also implicated in enjoyment of horror movies - as well as extraversion, warmth, conservatism, and psychoticism), social identity (something I've also blogged about before), and physiological arousal (though Rentfrow and Gosling's brief review of this subject still touches a lot on personality).

Of course preference would refer to what types of music you enjoy. Personally, I enjoy many different styles of music, everything from orchestral and choral music (what many refer to as "classical") to piano-driven pop to classic rock to blues (my background while writing most of this blog post was music of Stevie Ray Vaughan). But at certain times, I may prefer to listen to one style of music, or one particular artist, or even one particular song. What determines that minute-to-minute preference? One study (Ter Bogt, Mulder, Raaijmakers, & Gabhainn, 2011, abstract here) recently published in Psychology of Music may offer some explanation. They categorized their participants by self-rated level of importance of and involvement with music: high-involved, medium-involved, and low-involved listeners. High-involved listeners were the eclectic types - they liked a broad range of music styles, experienced a great deal of positive affect while listening, and reported that music served a variety of purposes in their lives: dealing with stress, constructing their identity, relating to others, and enhancing their mood. The other two groups showed more narrow music preferences and considered music to be a less integral part of their lives.

Relatedly, Saarikallio (2011 - abstract here) argued that music was important for emotional self-regulation, and performed interviews with people from a variety of age groups and levels of involvement with music, finding that reasons for listening to music included mood maintenance, distraction, solace, revival, and psyching up; reasons were quite consistent across age groups.

Though these studies don't tackle the topic directly, they suggest that people may select music from their internal list that they think will serve whatever purpose they're addressing (such as coping with stress or maintaining a happy mood). High-involved listeners have a larger internal list, and also get a great deal out of listening to music, so they probably do it regularly and may have certain songs in mind for particular needs. For example, I worked for a year in downtown Chicago, commuting from the north side. Though I had the El (that's the Elevated Train for non-Chicagoans) and didn't have to deal with Chicago drivers (shudder), the El was often crowded early in the morning and people were none too friendly. (I spent part of this time commuting with a broken arm and did anyone offer me a seat? No, but that's a blog post for another day.)  My solution for all the negativity: sublime choral music, especially Bruckner's Mass in e minor; just out-of-this-world gorgeous.  Made my commute so much more bearable.

There are countless other examples of studies examining the relationship between traits and music preference, whether those traits use personality theory terms (extraversion, openness to experience, etc.) or ability terms (musical abilities, etc.). Over the course of the literature I've read, I've had my ego stroked (you like lots of types of music and use music for emotional needs because you're a good musician - yay!) but also knocked down a bit (people who use music in those ways tend to have lower IQs - aw, man). But what about this notion of need? What need does music fulfill and can that explain the issues of musical cravings?

So who do I turn to when I want to examine human needs? Maslow, of course! Why didn't I think of it sooner? (See aforementioned finding about IQ.) Most people who have taken introductory psychology know Maslow as the guy who created the hierarchy of needs. 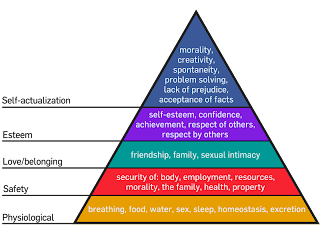 Look familiar? According to Maslow, human needs fit into one of five levels of the pyramid. Needs at the bottom of the pyramid are most important - without them, we don't really consider the needs higher up on the pyramid, because we're busy trying to fulfill those basic needs. So in order of importance, our needs are Physiological, Safety, Love/Belonging, Esteem, and Self-Actualization.

Arguably, music would be one of the Self-Actualization needs, falling perhaps under the sub need of creativity. How then can we explain the ubiquity of music in so many human cultures, even cultures that perhaps struggle to meet needs that are at the base of the pyramid? Of course, even though music is present in nearly all human cultures, there are certainly individual differences in importance of music (as was shown in studies above). Perhaps for some people, then, music falls on a lower, more integral part of the pyramid. For instance, Ter Bogt et al. (above) found that the high-involved music-lovers considered music to be an important part of their identity (both individually and socially). These individuals might place music, then, with Esteem or even Love/Belonging. In fact, music might fall in more than one place, and be used when fulfilling a variety of levels of needs; that might even explain why certain music is more appealing at certain times.

I'm sure I'm not the only one who experiences these musical cravings. Even so, despite services that introduce you to new music based on other music preferences, there doesn't seem to be anyone trying to measure and use these minute-to-minute variations to make a buck. Perhaps because when you get right down to it, no one completely understands it beyond knowing it exists.

Thoughtfully yours,
Sara
by Sara at 10:04 PM