We're on a tight schedule with a project at work, so I'm putting in lots of hours this weekend. (Don't worry, I'll make up for it by taking comp time next week). I've been using SPSS to create datasets for psychometric analysis and, though I told myself initially this probably wasn't necessary, I forced myself to create a syntax file for everything I do to the original data. And as I realized I missed an important step and had to start over, I was thankful I'd done that.

So, for some stats humor, I've created the following chart as a reminder to myself why I (and you, if you're doing something similar) should take that extra to create a syntax file: 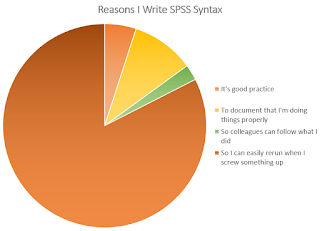