Last night, I went to see Split, M. Night Shyamanlan's new movie. Shyamalan seems to be like cilantro: you either love him or you hate him. And his newest contribution is probably no exception. In fact, I had many mixed feelings about the movie. 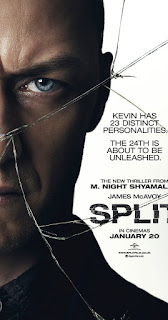 The basic premise is this: Kevin is a young man with dissociative identity disorder (DID, previously known as split personality or multiple personality disorder, though these are both antiquated terms). He has 23 confirmed personalities, and there is a potential 24th personality alluded to by the other personalities. At the start of the movie, Claire, Marcia, and Casey are leaving Claire's birthday party and are kidnapped by Dennis, one of Kevin's personalities. He locks them in a room, and though Claire insists they have to fight with every ounce of strength they have, Casey instead says they should watch and wait for an opening. We see flashbacks to Casey's childhood that help show us her approach from what she learned hunting with her father and uncle.

Kevin is also receiving treatment from Dr. Fletcher and sets up emergency appointments with her via email. Dr. Fletcher senses something is seriously wrong in Kevin's life, brought on by a triggering event at Kevin's work, but is met at the appointments by Barry, another of Kevin's personalities (the one who is presumably in control of Kevin and the other personalities) who enjoys fashion design. He spends the appointments instead talking about his latest designs, rather than whatever is bothering him. Dr. Fletcher tries to use her pre-existing rapport with Barry to get at the truth. We also learn that she believes DID is more than simply a mental disorder; it is a way to overcome physical disabilities, and "unlock the potential of the human mind."

In the meantime, Claire, Marcia, and Casey meet 2 of Kevin's other personalities, Patricia, a controlling English woman and Hedwig, a 9-year-old boy who tells them they are going to be sacrificed to the Beast, Kevin's as-yet unseen 24th personality. Casey forms a bond with Hedwig, that she exploits to help them escape. Unfortunately, Hedwig is suspicious and very dependent on Patricia and Dennis (another personality), so this exploitation doesn't get Casey very far. Claire and Marcia make fruitless escape attempts that instead result in them being locked up separately from Casey and each other.

My reactions to the movie are multi-faceted, and really align with my different roles:

As a writer, my response is that Shyamalan is a good storyteller, but as a writer first and filmmaker second, he has a tendency to tell us rather than showing us. He tries to overcome this by telling us then showing us, but it is not always as organic as it should be. For instance, he tells us about a gift one of Kevin's personalities is capable of then shows us for no real purpose in the story other than, "Oh, hey, look what he can do!" That is, his storytelling is primarily dialogue driven and secondarily visually driven, when as a filmmaker, it should really be the other way around. Shyamalan also continues to use his favorite literary concept playbook of red herring and Chekhov's gun.

As a Shyamalan fan specifically, I enjoyed much of the movie, and really liked the tie-in to another work. I won't say more because 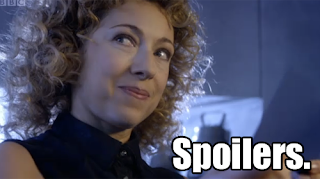 But if you're a Shyamalan fan, you'll probably enjoy the movie.

I also take issue with the fact that Kevin, a victim of horrific child abuse (which is the primary cause of DID), becomes the antagonist. There are so many better examples of how survival of such abuse changes a person that does not result in them being the bad guy. And to be fair, Casey is an example of a victim who becomes stronger as a result. (And yes, the movie passes the Bechdel test.)

So the movie, while trying to be somewhat accurate in its portrayal of DID (but also taking the concept out for a spin) ends up depending on stereotypes and myths. Dr. Fletcher's comment on "unlocking potential" of the human brain had me bracing myself for a "we only use 10% of our brain" myth eye-roll. She fortunately didn't use this myth, but I feel like it was creeping under the surface.

Overall, if you're a Shyamalan fan, I'd recommend checking the movie out. If you're a fellow psychologist (or at least knowledgeable about psychology), you'll probably have many of the same reactions, so be forewarned.
by Sara at 11:50 AM