I'm working on a new writing project, a horror movie parody, which involves me rewatching some of my favorites for joke material. It's literally me watching movies and instead of speaking my MST3K-style jokes aloud, I write them down instead. And I'm using my favorite notebook for the project: 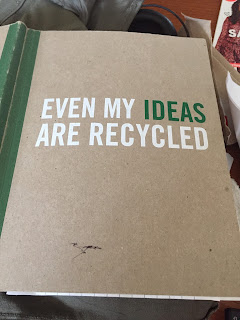 Side note: If you've never watched The Legend of Hell House, you're missing out, because it is the most unintentionally funny horror movie I've ever seen. It's on Netflix. Now you have no excuses.

But as is the case with me, I'm getting distracted by funny videos on the internet. I discovered this gem yesterday:


So, who wants to start a Kickstarter to get this movie made? Because this is the film the world needs right now.
by Sara at 11:44 AM