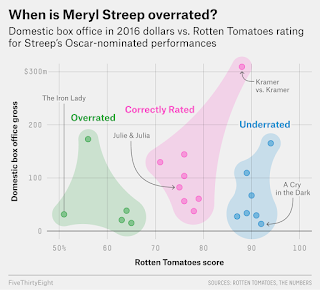 I love that he gives lots of love to Postcards from the Edge.


Still, “Postcards From the Edge” is by far her best work. She’s working with a fantastic script from Carrie Fisher, has great chemistry with Shirley MacLaine and dates peak Dennis Quaid. It’s by far the best demonstration that Streep has pipes and is the best movie she has ever been in. She lost to Kathy Bates in “Misery” that year, which is fine I guess, but this movie is the real gem of the Streep nominations.

Be sure to check out the "Emojified" chart of Streep Oscar-Nominated movies near the bottom of the article, which includes these awesome columns: Period Piece, True Story, Mom, Sings, Cheats, Sick, Dies, Accent.

Oh yeah, and through his article, I discovered this great video - Anne Hathaway singing "She's Me Pal" to Meryl at the 2011 Kennedy Center Honors ceremony:

BTW, the title of this post is a line from a movie (hint: Meryl wasn't in it), and Jennifer Lawrence got a lot of flack for quoting that line when she won her Golden Globe over Meryl. Anyone recognize it?
by Sara at 1:08 PM