I've continued to work from home during our shelter-in-place (something my boss recently told me we'll be doing for a while). During my copious downtime, I've gotten to watch a lot of things I've had on my watch-list, including the Netflix original series, Space Force. 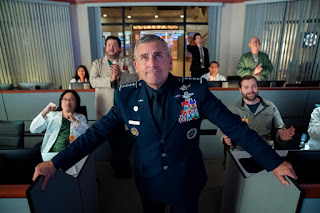 I've made my way through season 1 of the series, and thoroughly enjoyed it. I was surprised to learn - partway through watching - that critics did not enjoy the series nearly as much as I did. I'll get to that shortly.

I loved the political satire element of the show, that it was inspired by statements by our buffoon of a president. And I loved the periodic texts and tweets they referenced from a character they only referred to as "POTUS" (although, we all know who they mean). But really, I felt the critics were expecting something very different from what the show gave us, and that is the reason for their negative review.

While the concept is hilarious, and Mark Naird (Steve Carrell's character) is often a buffoon, the show is really a family drama framed by absurdist comedy. General Naird is a single father of a teenage daughter (Diana Silver, from Booksmart, which I also thoroughly enjoyed), after his wife (played brilliantly by Lisa Kudrow) is imprisoned for an unmentioned crime (which earned her 40-60 years, so clearly really bad). The show deals with a variety of family issues, not just the aforementioned single parenthood, but also teenage rebellion and substance abuse, fear of abandonment, and a parent who often feels married to their job. It dealt with the concept of an open marriage in a way that was authentic, while also being heartbreaking and funny at the same time. The show made me cry just as often as it made me laugh, and I could often relate to Mark's character - his heartbreak when his wife suggested an open marriage was so real, I bawled. It poked fun at the full political spectrum, as well as at Boomers, X-ers, and Millennials alike.

I think a lot of people were expecting Michael Scott as a general, but Mark Naird - though often a goof who really didn't understand science, which was an important part of his job, personified by his chief scientist (played so wonderfully by John Malkovich: better casting does not exist) - showed a surprising depth and understanding of people, in ways that both surprised and confirmed the conclusions of his scientists. Michael Scott seemed oblivious to the people who worked from him and showed zero understanding of people skills, while Mark Naird thought first and foremost about the people, and spoke eloquently on the topic.

I especially loved the character of Captain Ali (played by Tawny Newsome) and look forward (hopefully) to learning more about her character. Of all the characters on the show, she's my favorite.

It was also a joy to see Fred Willard as Mark's elderly father, who since filming his role has passed away. He will very much be missed and I'll be interested in seeing how they deal with the actor's death (since season 2 has not even been greenlit, let alone filmed). My only complaint was with the cheap jokes at his elderly mother's expense, including at one point showing the caretaker giving her CPR while Mark's father obliviously (and jovially) spoke on the phone. Mark's mother obviously has both lung (due to her being on oxygen) and heart (due to the CPR) issues, and as the daughter of a man with similar issues, I would have wished a show with so much heart had been more delicate with these conditions, rather than using them for cheap laughs.

My only disappointment with Space Force (other than my complaint above) is with the critics' reaction to it. I sincerely hope there is a season 2.
by Sara at 8:00 AM