On Presidential Approval Ratings and Opinions on Conviction


Americans' support for the Senate convicting Clinton in 1999 was much lower than current support for convicting Donald Trump. Gallup's Jan. 22-24, 1999, survey (one of a number we conducted while Clinton was on trial) found 33% of Americans in favor of Clinton being found guilty and removed from office, while 64% were against. Our latest survey on Trump shows 46% in favor of his conviction.

One interesting observation from the survey is that people place a higher bar on conviction than they do disapproval of Trump's job performance:


As noted, Americans' views on the impeachment of President Trump largely correlate with their overall views of the job he is doing as president. There is, however, a slight but evident deviation from a 100% relationship between Trump approval and views on the desired impeachment verdict.

Research also suggests that Trump's current approval rating is almost the highest it's been in his presidency, but is still a lackluster performance when compared to post-World War II presidents in general (who historically average 53 percent):

Enough about politics. Here's a cute puppy (mine)! 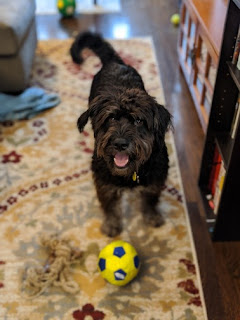 Email ThisBlogThis!Share to TwitterShare to FacebookShare to Pinterest
Labels: dogs and puppies, math and statistics, politics