Speaking of Stephen King, I recently went to see It Chapter 2 with a friend. Here's what I thought (while I try to keep spoilers to a minimum). 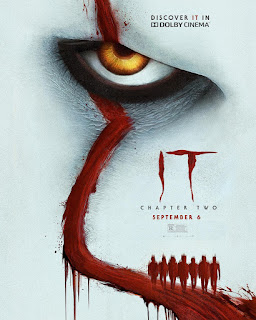 The story starts off in Derry, Maine, present day, when Pennywise the Clown is seen again. Mike Hanlon finds a message at the site of a murder that says, "Come home." He proceeds to call his fellow members of the Losers' Club, telling them it's time to keep the promise they made 27 years before: to come back and kill Pennywise if he ever returns. Unfortunately, the remaining "losers" don't remember their time in Derry, and have to be reminded of many of the events from the first movie in order to effectively fight Pennywise.

First, what I liked about the movie. While most of the movie takes place in the present day, there are a few scenes that go back to the losers as they were 27 years before. The clubhouse they built, which was very important in the book, finally makes an appearance. We also get to meet Bill's bike, Silver, at last. The movie, while scary, is also incredibly funny. The characters impart their dark, dry humor with each other often, even during tense scenes, which feels completely real and believable. And my favorite part was a great reference to this scene in my all-time favorite horror movie, John Carpenter's The Thing:


Oh yeah, and in addition to The Thing reference, the movie features some fun fan service for people who love horror movies, and great Easter eggs for anyone who loves horror movie trivia.

I also liked seeing Mike get a much more important role in this movie, since he was relegated to the sidelines in the first one and much of his contribution to that story was given instead to Ben. And some of the subplots from the book, while interesting, were cut from the movie, making it a much more straightforward story.

At the same time, the things I didn't like as much about the movie were also related to departures from the book. The clubhouse, while finally appearing, was given little to no importance in terms of the ritual to fight Pennywise. I also didn't like some of the changes they made to Mike. In the book, Mike often didn't tell the others things he remembered but they didn't because they needed to find them out in their own time. But movie Mike also lied to his friends and purposefully put them in danger, not something book Mike would have done. In the book, the danger was always Pennywise. Really, my biggest complaint about both movies has to do with their changes to Mike's character.

The Ritual to kill Pennywise was also much more interesting in the book, though I suppose it would have been difficult to film coherently, because the book version was much more about emotions and thoughts, as opposed to clear actions. Honestly, I didn't really like the way they defeated Pennywise in the movie, but I still enjoyed the rest of the movie, so I'll let it go.

Overall, It Chapter 2 was a fun, entertaining movie that neatly wrapped up the Pennywise and Losers' Club storylines. While I'm a little sad about some of the elements from the book that were cut or changed, I'm glad that they did this as a single film instead of a two-parter, as they would have had to in order to include some of the scenes Stephen King requested they keep in the movie. The tone of this movie is certainly different than the first, but it works. As I said, you could see these characters growing up into the sarcastic, wry, somewhat dark humor they impart throughout their scenes, based on what they went through in the first movie. Despite fighting a shape-shifting, pan-dimensional fear and flesh devourer, the characters felt real.
by Sara at 12:22 PM