What I Did on My Week's Vacation

It's been quite a week. I traveled to Kansas City Monday to spend time with my family. Tuesday was my parents' 47th wedding anniversary. Unfortunately, we ended up spending part of Tuesday at the ER when my dad's breathing problems were exacerbated by the hot weather and their air conditioner dying over the weekend. In fact, I was at the ER when a tornado warning was issued in Kansas City, MO, and I spent that time hunkered down in a back hallway waiting for it to pass. It turned out to be a small tornado, mostly knocking over some trees and dropping golf ball sized hail on part of the city. We returned home to restored air conditioning and a beautiful (but hot) rest of the day.

Wednesday, we stayed in and got take-out from Joe's Kansas City BBQ.

Thursday, I finally took the Boulevard Brewery tour, starting with a glass of Tank 7, and got to see the brewing operation. 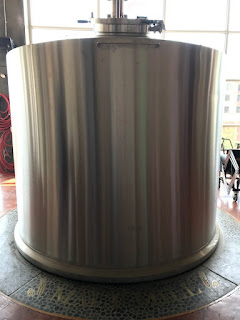 The tour ended with a beer and food tasting, featuring The Calling Double IPA and an open-faced ham sandwich with Clementine-Thyme marmalade, The Sixth Glass Quadrupel with brie and fig, The Bourbon Barrel-Aged Quadrupel (BBQ, made from The Sixth Glass aged in bourbon barrels and my favorite from the tasting) and goat-cheese cheesecake with blackberry, and The Dark Truth Imperial Stout and a chocolate chip cookie. All food came from KC restaurants and bakeries.

I picked up some yummy beer, including a four-pack of the BBQ, and a jar of the marmalade to bring home to Chicago.

I did a lot of writing - more on that (and hopefully some good news) later - and finished a couple books. Now, back to Chicago!
by Sara at 12:55 PM