I stumbled across an old (but still funny) cartoon about Blade crossing over into the Twilight universe and slaying Edward.  Okay, not actually Edward - they call him Edgar, probably to avoid copyright infringement.  But whatever.  And I thought, "Damn, if only..." 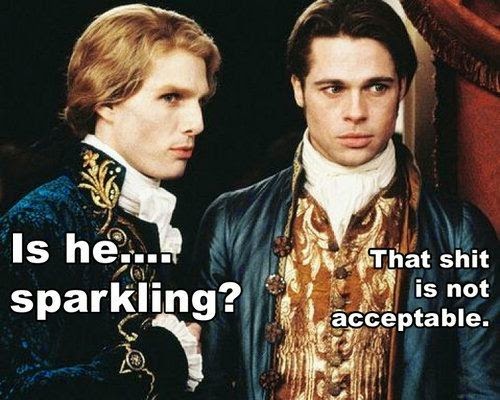 I've also already discussed (at length here and here) that Buffy the Vampire Slayer is my favorite show.  Of course, I'll be the first to admit the inconsistencies in its approach to vampire lore.  First of all, important vampire characters live longer in sunlight than throwaway characters, almost as if the love (or hatred, or sometimes a little of both) imbues them with additional powers.  One of the Master's goons (or really any character bereft of a name) can be thrown into sunlight and instantly explode, but Spike can sizzle for a full minute before an appendage bursts into flame.  Second, there is marked variation in vampiric gestation.  Some vampires awaken in the morgue (e.g., the vampire at the end of "The Body").  Others awaken on the table or in their casket at the funeral home (e.g., the vampire at the beginning of "Help").  Still others are buried, perhaps for days, before they wake up (e.g., Ford in "Lie to Me").  AND BUFFY ALWAYS KNOWS.  I think I need to watch more Buffy to figure this out...