Statistical Sins Late Edition: Looking for Science in All the Wrong Places

Recently, the Pew Research Center released survey results on where people look for and how they evaluate science news.

First, some good news. About 71% of respondents said they found science news somewhat or very interesting, and 66% read science news at least a few times per month. Curiosity is the primary reason people said they attend to science news.

And more good news. People recognize that the general media is not a great place to science news, with 62% believing it gets science information correct about half the time (or less).

The bad news? Over 54% said general news is where they tend to get science information. And worse - most (68%) don't actively seek science news out, instead just encountering it by chance. 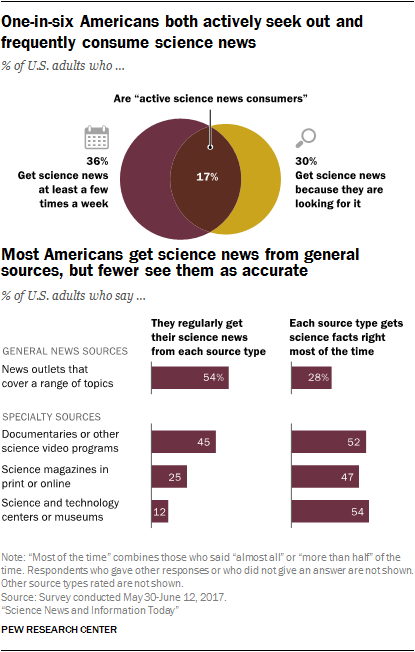 What does it say that the typical respondent gets their science news from a source they know can be very inaccurate and biased?

And as we've observed before with other topics, many beliefs about science and science reporting have become entangled with political ideology, with people considering themselves a republican less interested in scientific research on evolution, and also more likely to believe that science researchers overstate the implications of their research.

This suggests that not only is it important to improve scientific literacy, it's also important for people with a good understanding of science to share and disseminate science news and information with the public. Most people are not going to seek out better sources, so even if they know the usual suspects are biased, they're still only seeing those sources. And it's possible that, even though they recognize the bias, the sources they're encountering are even more biased than they think. While we can't make anyone trust a source, we can at least give them the tools and sources they need to hear (and hopefully understand) the full story.

You can read the full report, with frequencies of responses, here.
by Sara at 8:00 AM