Yesterday, Trump once again took to Twitter to mock a woman on her appearance, intellect, and attitude:


President Trump lashed out Thursday at the appearance and intellect of Mika Brzezinski, a co-host of MSNBC’s “Morning Joe,” drawing condemnation from his fellow Republicans and reigniting the controversy over his attitudes toward women that nearly derailed his candidacy last year.

Mr. Trump’s invective threatened to further erode his support from Republican women and independents, both among voters and on Capitol Hill, where he needs negotiating leverage for the stalled Senate health care bill.

The president described Ms. Brzezinski as “low I.Q. Crazy Mika” and claimed in a series of Twitter posts that she had been “bleeding badly from a face-lift” during a social gathering at Mr. Trump’s resort in Florida around New Year’s Eve. The White House did not explain what had prompted the outburst, but a spokeswoman said Ms. Brzezinski deserved a rebuke because of her show’s harsh stance on Mr. Trump.

The tweets ended five months of relative silence from the president on the volatile subject of gender, reintroducing a political vulnerability: his history of demeaning women for their age, appearance and mental capacity.

When asked during the White House press briefing, Sarah Huckabee Sanders actually defended the President's action, and turned it around as an attack on the media:


“The president has been attacked mercilessly … by that program. And I think he’s been very clear that, when attacked he’s going to hit back. The American people elected somebody who’s tough, who is smart and who is a fighter. It’s Donald Trump. And I don’t think it’s a surprise to anybody that he fights fire with fire."

My favorite part was when she said the President has never encouraged violence. Yeah, we've heard that one before: 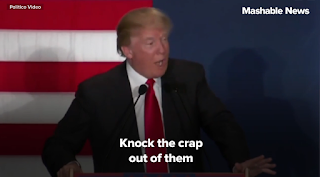 But she goes on to ask, "What about the constant attacks that he receives, or the rest of us?" This isn't the first time a statement such as this has been used by the current administration. This tactic is called "whataboutism" and it was frequently used by the Soviet Union:


Whataboutism is a propaganda technique used by the Soviet Union in its dealings with the Western world. When Cold War criticisms were levelled at the Soviet Union, the response would be "What about..." followed by the naming of an event in the Western world. It represents a case of tu quoque (appeal to hypocrisy), a logical fallacy that attempts to discredit the opponent's position by asserting the opponent's failure to act consistently in accordance with that position, without directly refuting or disproving the opponent's initial argument.

In fact the Wikipedia article linked and quoted above contains an entire section on Trump's use of whataboutism. Now, to be fair, regular people use this tactic as well - this isn't purely a propaganda statement. But it is troubling when an administration uses it to deflect criticism without responding to it or making any changes because of it. I've already commented on some of the dangerous directions the current administration is taking. This is another manifestation of a frightening trend.
by Sara at 10:16 AM