I haven't blogged in the last few days. Why? I'm back in Colorado again. (Sing that last line to the tune of Aerosmith's Back in the Saddle if you could.) A family health issue called me back and I'm writing this post from a dingy motel room with a large no smoking sign that I find hilarious because the room reeks of smoke - but it was the only place with a room available not too far from the hospital. But hey, I'm in Colorado, so here's what I'm doing for fun:

Tomorrow, I'm planning to spend a few hours checking out the Colorado Renaissance Festival. For now, here's a picture from the Garden of the Gods today: 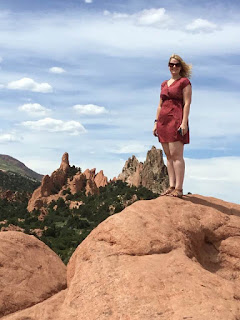