The Healthcare Debate Gets More Complicated

Repealing and replacing the Affordable Care Act was one of the President's key campaign promises. In fact, many people who said they voted for Trump did so because they believed he could fix healthcare in our country - though sadly some of them were themselves covered by thanks to the Affordable Care Act, and mistakenly believed Obamacare was something else. It seems misunderstanding about the healthcare system, policy, and how it works goes all the way up to top: 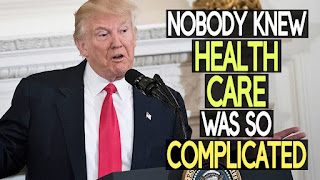 As this post in Talking Points Memo (via The Daily Parker) points out, the healthcare debate comes down to very different fundamental beliefs:


Pretending that both parties just have very different approaches to solving a commonly agreed upon problem is really just a lie. It’s not true. One side is looking for ways to increase the number of people who have real health insurance and thus reasonable access to health care and the other is trying to get the government out of the health care provision business with the inevitable result that the opposite will be the case.

The 80-20 rule (that 20% of some group accounts of 80% of resources) is as true in health care as it is in wealth distribution: about 20% of people use 80% of healthcare resources. Mostly, these are the sickest among us. The remaining 80% are either relatively healthy and don't need as much care, or don't use healthcare for one reason or another. That small proportion of people using a great deal of care have very complicated medical histories. Each additional condition - and potential treatment options - complicates their case sometimes exponentially. This requires strong care coordination among providers. The best way to do this and ensure providers are speaking to each other is to receive all care in the same organization, but the next best way is to ensure that each provider has access to full information about a person's medical history. And we still do not have a universal medical record that people can simply move from one organization to another. There are far too many issues with regard to privacy and information security that have not been resolved. So at the moment, unless an organization has a direct connection to another to share medical records (and some do), the onus is on the patient to either share these records - sometimes incurring substantial costs with copying and sending records - or to remember the pertinent aspects of their medical history when seeing a new provider. This very issue is also why I think the use of vouchers for VA patients is a very bad idea.

Not to mention that the ACA was about more than insurance coverage. It also included provisions to increase research into outcomes that really matter to patients as well as research that would identify best treatment for a specific patient (that is, best given their needs and values, and not simply what has been shown in large, homogenous clinical trial groups to be most effective). The ACA was about innovation in care. I wonder what aspects of that, if any, will be present in the replacement policy.

And to add yet another level to this complicated debate, Laura Bliss from CityLab reports why the minimum wage debate is also relevant to the healthcare debate. (I have to admit, when I first heard Kellyanne Conway say that people who will be thrown off Medicaid could just get a job to get benefits, I thought, "Of course if she sees that a buffoon like herself and Sean Spicer can get a job, she must think it's pretty damned easy.")

And of course, the ongoing debate about vaccinations and the decision of some parents to withhold some or all of the recommended vaccinations - as well as outbreaks of once-eradicated, often deadly conditions - is also relevant here.

And those are just the issues I thought of off the top of my head. There's a lot more to this. Yeah, no one knew how complicated this could be. </sarcasm>
by Sara at 4:50 PM