Welcome to the Hotel California As promised in last week's post, this week: sentiment analysis, also with song lyrics.

To demonstrate sentiment analysis, I'll use one of my favorite songs: "Hotel California" by the Eagles.


Using similar code as last week, let's pull in the lyrics of the song.


First, we'll chop up these 43 lines into individual words, using the tidytext package and unnest_tokens function.


This is also probably the point I would remove stop words with anti_join. But these common words are very unlikely to have a sentiment attached to them, so I'll leave them in, knowing they'll be filtered out anyway by this analysis. We have 4 lexicons to choose from. Loughran is more financial and textual, but we'll still see how well it can classify the words anyway. First, let's create a data frame of our 4 sentiment lexicons.


Now, we'll see how well the 4 lexicons match up with the words in the lyrics. Big thanks to Debbie Liske at Data Camp for this piece of code (and several other pieces used in this post):


NRC offers the best match, classifying about 13% of the words in the lyrics. (It's not unusual to have such a low percentage. Not all words have a sentiment.)


Let's visualize the counts of different emotions and sentiments in the NRC lexicon. 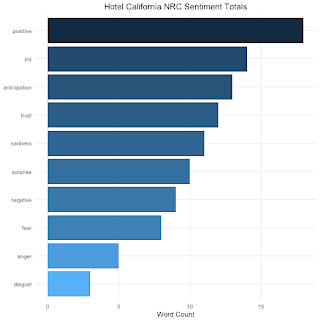 Most of the words appear to be positively-valenced. How do the individual words match up? 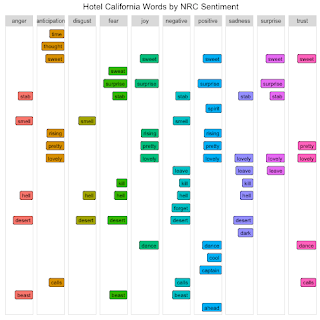 It looks like some words are being misclassified. For instance, "smell" as in "warm smell of colitas" is being classified as anger, disgust, and negative. But that doesn't explain the overall positive bent being applied to the song. If you listen to the song, you know it's not really a happy song. It starts off somewhat negative - or at least, ambiguous - as the narrator is driving on a dark desert highway. He's tired and having trouble seeing, and notices the Hotel California, a shimmering oasis on the horizon. He stops in and is greated by a "lovely face" in a "lovely place." At the hotel, everyone seems happy: they dance and drink, they have fancy cars, they have pretty "friends."

But the song is in a minor key. Though not always a sign that a song is sad, it is, at the very least, a hint of something ominous, lurking below the surface. Soon, things turn bad for the narrator. The lovely-faced woman tells him they are "just prisoners here of our own device." He tries to run away, but the night man tells him, "You can check out anytime you like, but you can never leave."

The song seems to be a metaphor for something, perhaps fame and excess, which was also the subject of another song on the same album, "Life in the Fast Lane." To someone seeking fame, life is dreary, dark, and deserted. Fame is like an oasis - beautiful and shimmering, an escape. But it isn't all it appears to be. You may be surrounded by beautiful people, but you can only call them "friends." You trust no one. And once you join that lifestyle, you might be able to check out, perhaps through farewell tour(s), but you can never leave that life - people know who you are (or were) and there's no disappearing. And it could be about something even darker that it's hard to escape from, like substance abuse. Whatever meaning you ascribe to the song, the overall message seems to be that things are not as wonderful as they appear on the surface.

So if we follow our own understanding of the song's trajectory, we'd say it starts off somewhat negatively, becomes positive in the middle, then dips back into the negative at the end, when the narrator tries to escape and finds he cannot.

We can chart this, using the line number, which coincides with the location of the word in the song. We'll stick with NRC since it offered the best match, but for simplicity, we'll only pay attention to the positive and negative sentiment codes.


This gives us a data frame that aggregates sentiment by line. If a line contains more positive than negative words, its overall sentiment is positive, and vice versa. Because not every word in the lyrics has a sentiment, not every line has an associated aggregate sentiment. But it gives us a sort of trajectory over the course of the song. We can visualize this trajectory like this: 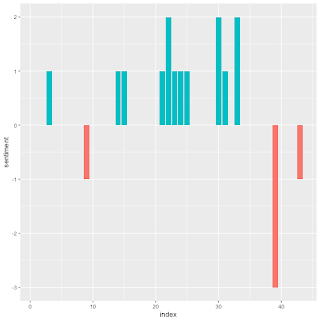 As the chart shows, the song starts somewhat positive, with a dip soon after into the negative. The middle of the song is positive, as the narrator describes the decadence of the Hotel California. But it turns dark at the end, and stays that way as the guitar solo soars in.

This awesome post by Debbie Liske, mentioned earlier, for her code and custom functions to make my charts pretty.

Text Mining with R: A Tidy Approach by Julia Silge and David Robinson
by Sara at 8:30 AM