What happens to your eyes when you look directly at the sun? A woman in her 20s, the solar eclipse, and 6 seconds have helped us get the answer to that question:


By the time the 20-something woman in today’s case study — published in the journal JAMA Ophthalmology — looked at the sun, it was already 70 percent covered by the moon. Three days later, she headed to the Mount Sinai’s New York Eye and Ear Infirmary, where doctors informed her that she had damaged her retinas by looking into a giant ball of glowing gas that emits radiation that burns your eyes.

Images of her eyes are the first time we’ve been able to see such detailed pictures, thanks to advances in optics. These showed that both eyes were affected, with the left eye especially having damaged photoreceptors and a lesion. Unfortunately, no treatment for eye damage from staring at the sun — technically called solar retinopathy — currently exists.

It only took 6 seconds for her to do permanent and serious damage. Here are the images of her retina published in the article: 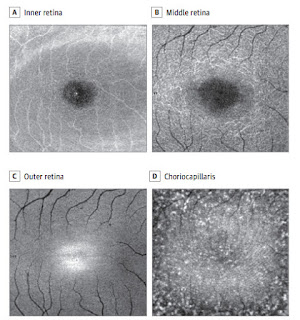 Hopefully you got to see the eclipse. And hopefully, you used the proper eye protection so you'll be able to see the next one.
by Sara at 1:25 PM