And the Winner Is...

Time magazine announced the winner of the 2017 Person of the Year: the #MeToo movement: 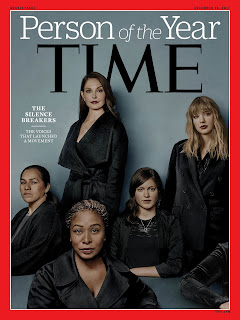 Time refers to the women behind the movement as "The Silence Breakers." And though this movement has received widespread attention this year, the hashtag was actually started 10 years ago by Tarana Burke.


#MeToo rose to prominence as a social media campaign in the wake of high-profile accusations against Hollywood producer Harvey Weinstein. After actress Alyssa Milano popularized the hashtag, thousands of women began sharing their stories about the pervasive damage wrought by sexual harassment and by "open secrets" about abuse.

The movement's empowering reach could be seen in the platform on which Time announced its choice: the Today show. It was just one week ago that NBC fired the morning program's longtime and powerful co-host, Matt Lauer, over a detailed complaint of "inappropriate sexual behavior in the workplace."

While the most high-profile #MeToo stories have come from women and men who work in the movies and media, the Time article also features women who work hourly jobs, some of whom want to remain anonymous. The magazine's cover portrait includes strawberry picker Isabel Pascual, lobbyist Adama Iwu and former Uber engineer Susan Fowler along with Ashley Judd and Taylor Swift.