I encountered this great video on Facebook this morning:


The video references one of the great contributions to film theory, the Bechdel test, which I've mentioned in a previous blogpost, but never delved into what exactly it means.

The Bechdel test (actually developed by Liz Wallace and publicized by Allison Bechdel) is based on the following questions. In a movie:
A simple test that many movies fail. The test was revised with the addition that the two female characters should have names. As many have pointed out, it's a rather low bar for movies and passing it doesn't mean that women are being portrayed in realistic ways. They can still be "underwritten" even if they talk about something other than men. After all, the video above even passes the Bechdel test. 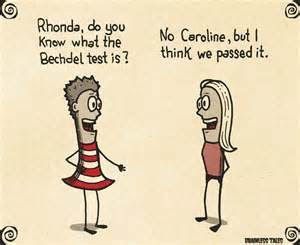