The Lipstick Effect and the Cosmetics Industry as "Recession Proof"

Our most recent economic downturn has had many impacts on various industries. During the worst of it, I served on a board of a non-profit choir, where we dealt with budget concerns due to shrinking ticket sales. Because of the uncertainty in the economic climate, as well as a large group of people unemployed or underemployed, people weren't spending as much on the arts, and if they were, they tended to buy tickets close to the event, rather than in advance.

Over the years, many people have argued that a certain industry is "recession proof" - usually to be proven wrong when a recession actually happens. However, as I learned in an article I read today, one industry seems to flourish during hard economic times: the cosmetics industry. The article details a study into the so-called "lipstick effect," which refers to women's increased desire for and use of cosmetics during economic recession. 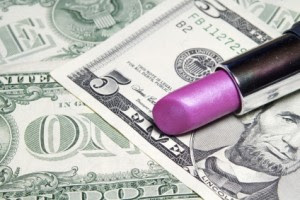 It has been argued that women do this to secure a more financially stable mate. However, this particular study looked at use of cosmetics in two contexts: to attract romantic partners and to improve their appearance in the workplace.

Studies 1 and 2 used interest in six appearance-enhancing items (lipstick, dress, mascara, nail polish, perfume, and face cream) as the outcome. In both studies, they found that high economic concern resulted in greater interest in the six items. But studies 3a and 3b (which are really two separate studies, so I'm not sure why they didn't just call them 3 and 4) looked at the differences between using cosmetics to appear more professional or to appear more attractive. They found that - contrary to what has been said about the lipstick effect before - women with high economic concern were more interested in appearing professional than romantically attractive. Some women were still interested in appearing more romantically attractive, it just wasn't driven by economic concern.

A great deal of research has shown that attractive women tend to be more successful in the workplace than equally competent less attractive women. Attractive women are more likely to be hired, earn higher salaries, and are more likely to be given promotions. This is not to say they succeed only because of their looks; they have to know what they're doing and if a less attractive person is much more qualified, they will probably get the job. But appearance does give them a boost when they are equally matched with their competition in terms of skills. So using products to make oneself more attractive can have real financial rewards.

As more and more women work full-time, and fewer plan to end their career when they get married or have children, it makes sense that the lipstick effect may need an update. Men may still out-earn women, on average, but unlike 50 years ago, it's not unusual for the woman to be the "breadwinner" and out-earn her husband or partner. As a result of these social changes, the lipstick effect may need to be updated to reflect desire to appear attractive and professional, as opposed to desire to appear attractive to a potential mate.

Either way, the lipstick effect highlights that the cosmetic industry may in fact be recession proof. Though people may not be spending money on concert tickets, they will continue to spend money - and in fact, may spend more money - on products that help them look good.
by Sara at 10:36 AM