In high school, a boyfriend introduced me to animé. Pokémon was one show I was introduced to, though it certainly wasn't my favorite. But the games were fun, which was probably the whole point. I remember taking my Gameboy with me just about everywhere. And I thought that was the epitome of mobile gaming.

How wrong I was. Pokémon Go, a smartphone app that gets people out of their homes and out into the world to catch Pokémon - that is the epitome of mobile gaming. (For now, anyway. The great thing about technology is just when you think things can't be any different, they suddenly are.)

Of course, there are some problems with Pokémon Go, or really any mobile app. True, there are many people who are on their phones non-stop, which can get a little frustrating if you're hanging out with them. People have said before that they couldn't make the show, Seinfeld, today because most of their hilarious situations could be solved by cell phones. I'll take it one step further and say that the witty banter in the diner would be replaced by a group staring at their phones - and perhaps Jerry tweeting his jokes, rather than sharing them with his friends.

But there's spending a lot of time on your phone, and then there's being glued to your phone in case a rare Pokémon shows up - like this man who caught one while his wife was in labor. I'd be pretty annoyed, and it's not because it's Pokémon - I'd be equally annoyed if my husband were playing Words with Friends while I was giving birth.

Part of the game is that people are encouraged to get out and visit new places to catch Pokémon. It might even encourage people to talk to others - for instance if a Pokémon is in someone's yard, you might have to speak to them to be let in to catch it. So getting exercise and socialization is a good thing.

Of course, some people can become so glued to the game that they find themselves in unsafe situations. A group of teenagers used the game to lure people into a parking lot to be robbed. In another case, a young woman stumbled upon a dead body while playing. And of course, walking while staring at your phone is going to lead to some bumps and bruises.

But I'll admit, I'm a little curious about the game. 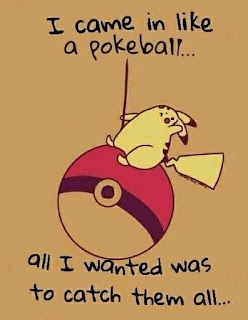