My friend over at The Daily Parker shared this story with me yesterday: an analysis of the resentment toward the establishment experienced by Trump supporters, or what the author calls "The Anti-P.C. Vote". The article touches on many important psychological concepts, and is definitely worth a read.

For one, the author, Thomas Edsall, discusses Trump supporters' negative views on immigration, and comments that opinion polls suggest that people favor immigration. In trying to explain this disconnect, he reached out to Lefteris Anastasopoulos, who explained the problem may be with how the polls are conducted. Opinion polls often ask broad questions about issues, such as "Do you support increased immigration to the United States?" or "Do you support amnesty for undocumented immigrants?"

Anastasopoulos argues that, when broad questions are used, people respond in more politically correct ways. I would take this one step farther and suggest that, when broad questions are used, people use their preconceived notions of what is typical or desired to fill in the missing pieces of the question, and then respond to the question based on that specific situation they have in mind. A great in-depth analysis of this issue can be found in one of my favorite books, Commonsense Justice by Norman Finkel. This book had a strong influence on me and the direction of my dissertation research. 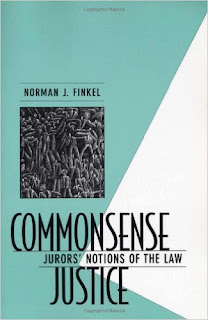 In the book, Finkel discusses why people as a whole may support a certain policy - such as hate crime legislation - but then, when serving as a juror on a case, balk at the severity of sentencing that they may attempt to find the defendant guilty of a lesser crime or even, in rare cases, find the defendant not guilty, even in the face of overwhelming evidence of guilt. The latter case is referred to as "jury nullification." The reason for this disconnect, Finkel argues, is in how opinions are elicited in polls - with broad questions. He found that when specific examples are given to show a typical case (which differs greatly from the extreme examples people have in mind when responding to polls), support goes down.

Another explanation offered for Trump supporters is psychological reactance, which I've blogged about previously, as well as during the April A-Z. Basically, psychological reactance occurs when you feel your sense of free will is threatened; when you feel forced into behaving a certain away, you rebel and do something else (even the opposite) simply to prove that you have free will. Again, Edsall reached out to a psychologist, Jonathan Haidt, to get additional information and application of this concept:


Haidt applies this to the 2016 election: "Translated to the Trump phenomenon, I would say that decades of political correctness, with its focus on “straight white men” as the villains and oppressors — now extended to “straight white cis-gendered men” — has caused some degree of reactance in many and perhaps most white men."

In both the workplace and academia, Haidt argues, "the accusatory and vindictive approach of many social justice activists and diversity trainers may actually have increased the desire and willingness of some white men to say and do un-PC things."

In this atmosphere, according to Haidt: "Trump comes along and punches political correctness in the face. Anyone feeling some degree of anti-PC reactance is going to feel a thrill in their heart, and will want to stand up and applaud. And because feelings drive reasoning, these feelings of gratitude will make it hard for anyone to present arguments to them about the downsides of a Trump presidency."

Not only are Trump supporters perhaps experiencing reactance, but Trump gives them an outlet for that reactance. So rather than having the outcomes of reactance on the small-scale and in specific situations, supporters can direct that feeling toward a larger cause that they perceive will bring about widespread changes.

As a psychologist, I very much enjoyed Edsall's analysis of the issue. As a citizen, I'm terrified.
by Sara at 9:19 AM