I received this link the other day from a friend: Science shows what humans will look like in 1000 years.

There are some mistakes in this title, so I've taken the liberty of editing it for them:


Longer, but an improvement. As I've blogged about before, science is a method for conducting and presenting research. The interpretation, prediction, and (let's face it) speculation that results from results generated by scientific studies is not science, but an adjunct to science, with some conclusions being more justifiable than others. The problem is that often people slap "science" onto something to make something sound more valid. But science is a method, and just as some conclusions based on scientific research are more justifiable than others, some methods are more justifiable than others. Simply because someone used "science" doesn't make it automatically correct - it could be bad science. Or weird science. Or [insert your favorite adjective] science.

So this article begs the question: 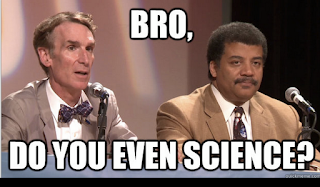