On Books, Bad Marketing, and #MeToo

I recently read a book I absolutely loved. Luckiest Girl Alive by Jessica Knoll really got to me and got under my skin in a way few books have. When I went to Goodreads to give the book a 5-star rating, I was shocked at so many negative reviews of 1 and 2 stars. What did I see in this book that others didn't? And what did others see in the book that I didn't?

Nearly all of the negative reviews reference Gone Girl, a fantastic book by one of my new favorite authors, Gillian Flynn. And in fact, Knoll's book had an unfortunate marketing team that sold her book as the "next Gone Girl." Gone Girl this book is not, and that's okay. In fact, it's a bad comparative title, which can break a book. The only thing Ani, the main character in Luckiest Girl Alive has in common with Amy is that they both tried to reinvent themselves to be the type of girl guys like: the cool girl. Oh, and both names begin with A (kind of - Ani's full name is Tifani). That's about it.

While Gone Girl is a twisted tale about the girl Amy pretended to be, manipulating everyone along the way, Luckiest Girl Alive is the case a girl who was drugged and victimized by 4 boys at her school, then revictimized when they turned her classmates against her, calling her all the names we throw so easily at women: slut, skank, an so on. No one believed her, and she was ostracized. She responded by putting as much distance as she could from the events of the past and the person she was, hoping that with the great job, the handsome and rich fiance, designer clothes, and a great body (courtesy of a wedding diet that's little more than an eating disorder), she can move past what happened to her. She becomes bitter and compartmentalized (and also shows many symptoms of PTSD), which may be why some readers didn't like the book and had a hard time dealing with Ani.

I know what's it like to be Ani. Like her, and so many women, I have my own #MeToo story. And I know what it's like to have people I love react like Ani's fiance and mother, who'd rather pretend the events in her past never happened, who change the subject when it's brought up. It's not that we fixate on these things. But those events change us, and when a survivor needs to talk, the people she cares about need to listen, understand, and withhold judgment.

That marketing team failed Jessica Knoll for what should have been a harsh wakeup call in the age of #MeToo, to stop victim blaming. Just like Ani's classmates failed her. And just like nearly everyone close to her failed Amber Wyatt, a survivor of sexual assault who was recently profiled in a Washington Post article (via The Daily Parker).

Given these reactions, it's no wonder many sexual assaults go unreported. Some statistics put that proportion at 80% or higher, with more conservative estimates at 50%. And unfortunately, the proportion of unreported sexual assaults is higher when the victim knows the attacker(s). They're seen as causing trouble, rocking the boat, or trying to save face after regretting a consensual encounter. It's time we start listening to and believing women. 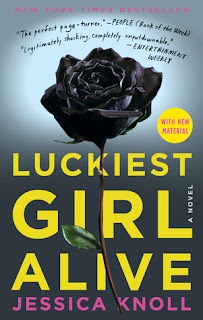