W is for John Watson

John Watson, an American psychologist, was responsible for the establishment of behaviorism, which had a stronghold in the field of psychology for many decades. 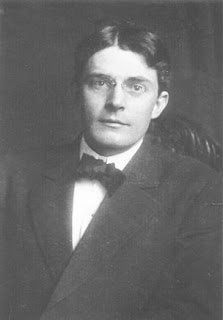 This was in part due to the methods available to study people - the only way we could observe what happens within a person's brain was by asking them how they were feeling, what they were thinking, and so on. Behaviorists determined that because the only thing we could observe was behavior, that should be the only thing we measure. Taken to its extreme is the stance that observable behavior is everything, thought and feelings essentially don't exist, and the only factors affecting behavior are external to the person. This particular school of thought is often called "radical behaviorism."

I could go on for a while about Watson, thanks to the fact that I was briefly brainwashed by behaviorists in undergrad. My undergraduate program had a very strong behaviorist slant, I had a pet rat (a baby of two of the rats from our rat lab), and I even took an entire course devoted to B.F. Skinner. So I was walking around spouting about a variety of behaviorist concepts, including Watson's "tabula rasa" or "blank slate." Essentially, what this concept means is that, when we are born, our mind is a blank slate - Watson and other radical behaviorists did not believe that babies were born with any semblance of a personality. All behavior is learned from the environment. That is, radical behaviorism is a deterministic model: it denies the existence of free will. In fact, Watson once said:


Give me a dozen healthy infants, well-formed, and my own specified world to bring them up in and I’ll guarantee to take any one at random and train him to become any type of specialist I might select—doctor, lawyer, artist, merchant-chief and, yes, even beggar-man and thief, regardless of his talents, penchants, tendencies, abilities, vocations, and race of his ancestors.

In one of Watson's best known studies, he shaped a baby to be afraid of something he had originally loved. This controversial study was known as the "Little Albert" experiment. "Albert" (not his real name) loved white rats; at least, they discovered that he loved white rats when they introduced him to one, along with various objects, to try to decide what to shape the boy to be afraid of (yes, really). That is, Watson was trying to prove that humans were not born with many fears; nearly all fears are shaped by the environment. What humans are naturally afraid of are loud noises. So, Watson decided to use loud noises to condition Albert to be terrified of the white rat.

Every time Albert encountered the white rat, Watson would make sudden loud noises. Over time, Albert began to show fear toward the white rat. But it didn't stop there. Albert was afraid of anything white and furry, including bunnies and a Santa Claus mask. Now, for his next study, Watson was going to undo the fear conditioning he introduced to poor Albert, but Albert moved away before that study could be completed. Though people tried to track down Little Albert later on - to see if there was a man with an irrational fear of white furry things out there - his true identity has not been confirmed.
by Sara at 8:00 AM