T is for Norman Triplett

As I mentioned during my History of Social Psychology post, Norman Triplett is credited with having conducted the first experiment in social psychology, in which he examined an effect known as social facilitation. 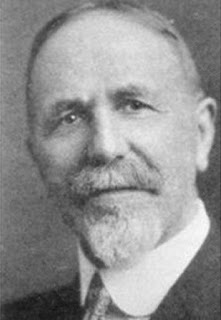 Social facilitation occurs when you perform better when others are present than when you are alone. In his first study of the phenomenon, he noticed that cyclists were faster when someone else was riding with them than on their own. He decided to study this concept in the lab. He recruited 40 children, and had them turn fishing reels. He divided them into groups, where they alternated between performing the task individually or in competition with another child:

Interestingly, as I was doing some quick reading to refresh my memory, I discovered some new (to me) information about the study. An article by Stroebe (abstract here) included a reanalysis of the data and found differences between alone and competition performance, but none of these differences were significant. At the time Triplett conducted this study, he didn't have access to statistical analyses we have today, so he instead eyeballed the data. What statistical analyses do is remove guesswork and experimenter bias when examining results. We use controls while conducting the research to keep the experimenter from having an impact on participants, and giving them clues about how they are supposed to behave, but those controls are meaningless if we don't also have an unbiased way of analyzing the data.

We interrupt this blog post to give you a crash course in statistics. Statistics allow us to look for patterns in data, by examining differences in scores (which we call variation). Some variation is random, due to things like individual differences, fatigue, and so on; in Triplett's study, that would be the variation within the "alone" conditions or the "competition" conditions. This information tells us how much variation we will expect to see in scores by chance alone. Other variation is systematic, due to the experimental conditions; in Triplett's study, that would be the difference (variation in scores) between "alone" and "competition".

We compare these two types of variation to determine if our condition had an effect. If we see more of a difference between alone and competition (systematic) than we see by chance alone, we conclude that our experimental conditions had an effect. And our analyses give us a probability - that is the probability, if only chance were operating (no experimental effect), that we would see a difference between groups of that size.

Of course, I'm oversimplifying, but this is the basic premise of statistics. It might seem technical and unnecessary to some, but it keeps researchers honest. I mean, if you think you're going to see an effect, you devote time and energy into setting up and conducting the study, and then more time and energy into compiling your data, wouldn't you hope to see the effect you were expecting? To the point that you might see patterns that aren't actually there? As a field, we have agreed that we want as little bias as possible in conducting, analyzing, and reporting results, so we've developed methods, statistical analyses, and reporting standards to do just that.

To be fair to Triplett, he didn't have access to these statistical analyses at the time, so we'll forgive him for simply eyeballing the data. Further, more researchers have studied social facilitation and found support for it. In fact, this later research shows that social facilitation can occur in two ways: co-action (or competition, as Triplett studied) and audience.

In addition to social facilitation, Triplett also contributed to the psychology of magic - rather, what occurs in the perceiver watching a magician. This included concepts like misdirection and suggestibility. You can read the full-text of his article on the topic here.
by Sara at 8:00 AM