S is for Stanford Prison Experiment

In 1971, a young professor by the name of Philip Zimbardo conducted a study in which he simulated a prison in the basement of a university building. Participants (total of 24 men) were recruited through a newspaper ad for a 2-week study, and paid $15 a day. Half were randomized to serve as prison guards, who took orders from a research assistant who served as warden and Zimbardo who served as prison superintendent. They were given a uniform that consisted of batons, mirrored sunglasses, and khaki clothing from a military surplus store.

The other half were randomized to serve as prisoners. In order to make the study as realistic as possible, Zimbardo got the cooperation of the Palo Alto police department, who picked up each prisoner, arrested them (complete with frisking and handcuffing), and booked them, before finally dropping them off at the prison, blindfolded. They were also given a uniform: a smock, stocking cap, and chain around their ankle.

All participants, whether assigned to be guard or prisoner, were subjected to rigorous psychological testing before being accepted into the study, to ensure they had no mental or physical illnesses, and had no history of crime or drug abuse. So these were all healthy, "normal" young men who had never been inside a prison. Everything they did was a product of their experience in the study, as well as, for the prison guards, imitation of what they'd seen portrayed in the media and instructions from Zimbardo and the RA. The guards were told that they were not allowed to harm the prisoners, or withhold food/water, but were encouraged to create an atmosphere in which the prisoners lost their sense of individuality and identity, and were made to feel powerless.

Unfortunately, the study quickly got out of hand. The guards began using psychological control tactics on prisoners, and one prisoner began (in the words of Zimbardo) to "act crazy" - and even Zimbardo got carried away, at first chiding the prisoner about being weak, before finally realizing the participant was truly suffering and releasing him. However, even this momentarily realization with this participant did not change the way he and others acted toward the remaining prisoners.

It took an outside observer, a graduate student named Christina Maslach, whom Zimbardo was dating (and later married), for Zimbardo and others to see that things had gotten out of hand. She told Zimbardo that what he was doing was unethical, and in fact, threatened to break up with him if he didn't call off the study. What was supposed to be a two-week study ended after 6 days.

This study, and others I've blogged about this month, resulted in widespread changes to ethical standards for research. However, this study also inspired Zimbardo's research on how situations turn people bad. That is, rather than having bad apples, Zimbardo argues for the "bad barrel" - good people can be made to do terrible things in the right situation. He wrote about this in his book, The Lucifer Effect: 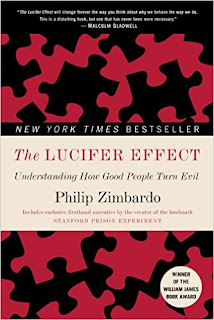 A documentary (Quiet Rage) was made shortly after the study was completed, and some of the participants were reunited to discuss their experiences. What is striking is that, among the prisoners, there was still a great deal of resentment for how they were treated by the guards.

And as with the Milgram study, a movie was very recently released about the study: