It's the most wonderful time of the year...

I've been a basketball fan my entire life, and like my family, I'm a huge fan of the University of Kansas Jayhawks. They've had a great record in the tourney: 45 total appearances, including 28 times in the Sweet Sixteen, 21 times in the Elite Eight, 14 times in the Final Four, and 3 championship wins. Once again, they're the Big 12 Champions this year, and were selected as a #1 seed during Selection Sunday yesterday. This gives them a (theoretically) easier schedule during the tournament - the #1 seed plays the #16 seed in the first game and, if they win that game, the winner of the #8-#9 matchup game. They wouldn't have to play a higher seed than that until the Regional Semifinals (depending of course on who wins the #5-#12 and #4-#13 matchups).

In addition to just being a basketball fan, I love the tournament. The tournament is single elimination, and though higher seeds get matched up with lower seeds in their games, anything can happen. There are always upsets, like in 2013 when a #9 seed (Wichita State) made it to the Final Four and a #15 seed (Florida Gulf Coast) made it to the Sweet Sixteen. Or 2014 when University of Dayton (#11) beat Ohio State (#6), resulting in this hilarious headline poking fun at THE Ohio State: 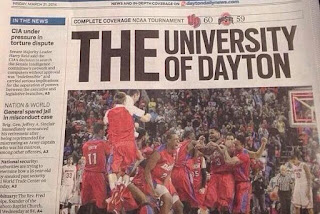 But I really fell in love with the tournament about 10 years ago when I realized it's all about data.

Mounds and mounds of data. So putting together a good bracket is really about using data to make predictions.

The past few years, I've decided to run tests of different bracket methods, to see which one comes out on top. I usually have one bracket I base entirely on who I want to win each game. Then for the remaining brackets, I'll try everything from running statistical models to predict winners (the most data intensive) down to simply flipping a coin (chance). I'll do the same thing again this year and plan to report my results. Stay tuned!
by Sara at 10:37 AM