A bitchy alternative to the usual blank look most people have. This is a condition affecting the facial muscles, suffered by millions of women worldwide. People suffering from bitchy resting face (BRF) have the tendency look hostile and/or judgemental at rest.

Though there are some exceptions (Kanye West), most people accused of having resting bitch face (RBF) are women. Unsurprising, considering use of the word "bitch" - otherwise, wouldn't it be resting jerk face? In fact, one Urban Dictionary definition focuses on this aspect of RBF:


Originally meant to describe a bland or emotionless facial expression (resting) that unintentionally appears angry or grumpy (bitch face), the phrase has devolved and is now often used to shame women who have the audacity to not smile cheerfully every moment of every day for other people's enjoyment whether they feel happy or not.

The researchers found that the explanation for RBF is that some faces show contempt, even in their neutral state. As the researchers explain, contempt can be displayed through things like "one side of the lip pulled back slightly, the eyes squinting a little... or tightening around the eyes, and a little bit of raising of the corners of the lips — but not into a smile."

What is interesting, though, is that the researchers did not find gender differences for RBF - it appears to affect both men and women equally. So why do women get all the criticism for RBF?

Women are often criticized for not smiling, and may have random people on the street tell them to smile. It's definitely happened to me multiple times, as well as many of my friends. I don't know if men experience the same thing, but I'm guessing not, since I've never heard any of my guy friends say anything about it when listening to my girl friends complain about it.

In face, even Aimee Mann has people stop to tell her to smile - enough for her to name an album this to show her annoyance: 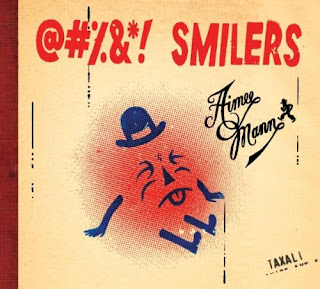 I'll admit, I don't always find it annoying, though there are times I'm not smiling for a reason, and being told to smile isn't going to make that reason go away. But I'm guessing, since people continue to tell others to smile, that many don't understand what's so annoying about it. After all, isn't it a compliment to believe that women are happy and cheerful, and to ask them to show those emotions?

At the same time, there is some research that shows smiling can actually make you feel happier. Check out this TedTalk for a great overview of these findings. These studies test something known as the "facial feedback hypothesis" - that is, your facial expression provides information on how you are feeling. So if you're smiling, you must be happy, right?  One of the first studies on the topic, for example, asked participants to hold a pencil in their mouths, either in a way that forces a smile or one that forces a frown: 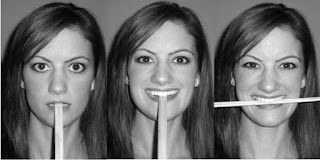 But one way these studies differ from the real world situation of being told to smile is that people either 1) choose to smile themselves or 2) are asked to smile for some other purpose (not just to smile for smiling's sake). Would the researchers have found the same thing if they had walked into the room with the participant and said, "You know, you should smile more"?