"I'll Never Be That Good": Social Comparison, Discouragement, and Self Theories

We are constantly being evaluated. Not only at work or in school, but in nearly every aspect of life, we are being evaluated based on any number of characteristics: appearance, intelligence, ability, etc. Even when others aren't evaluating us, we're evaluating ourselves. In fact, self esteem is defined as a positive or negative evaluation of oneself: are we who we want to be? According to Maslow, once our basic needs are met, and we feel a sense of belonging with people we care about, self-esteem becomes an important focus in our lives - and only with self-esteem, confidence, and achievement can we reach the highest level in his hierarchy of needs: self-actualization. 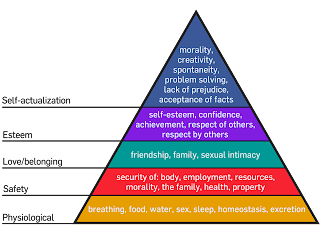 But what happens when we compare ourselves to someone much better than us - unattainably better? According to a recent study, we're likely to give up.

The researchers did two studies. In the first, they used real-world data from a massive open online course (free online courses, such as those you find on Coursera - they didn't state which course/provider they used because the proprietor preferred to remain anonymous). In order to receive a grade/certificate for the course, students were required to evaluate at least 3 essays written by other students (assigned at random). They found that students assigned to review higher quality essays were less likely to complete the course, and if they did complete, they tended to receive lower grades, than students assigned to review poorer quality essays.

In the second study, the researchers did an online experiment to try to understand why reading a high quality essay makes one more likely to give up. They gave participants an essay prompt from the SAT writing section and had them write an essay of 100 words or more. Participants then read and evaluated either two well-written essays or two poorly-written essays. They were asked whether they felt their essay was better than the two they read and whether they were capable of writing an essay better than the two they read, then answered questions about whether writing an excellent essay is relevant to how they feel about themselves (a concept called domain identification). Afterward, participants were given the option to write another essay for additional money. People who read the well-written essays were less likely to: think their essay was better, think they could write a better essay, and write the second essay. They also had lower domain identification scores.

Domain (de)identification is often used a proxy for discouragement. It's frequently used in stereotype threat research (something I've blogged about many times, and studied for my masters thesis). Stereotype threat occurs when a stereotype of a group impacts an individual group member's performance - such as a woman being reminded of the stereotype that women are bad at math right before she has to take a math test. One of the effects of reminding someone of a stereotype is that s/he will deidentify from that domain - such as deciding that being good at math just isn't important to her.

Of course, one important concept that wasn't examined in the study above (but has been examined somewhat in stereotype threat research) is self theories (or the long title: implicit theories of intelligence), a concept developed by Carol Dweck. People have different ideas about where ability comes from: they may believe ability is innate (you're born with it, "fixed") or they may believe ability results from hard work and study ("incremental").

It's actually a continuum, so people can fall between the two extremes, or believe that some abilities are innate while others are learned. The important thing about this theory is that it can explain motivation in the face of failure. People with a fixed view of intelligence will often give up when they fail, because they don't believe they can improve. People with an incremental view instead view failure as a sign to work harder, because they believe they can improve. With regard to women and stereotype threat, research suggests women are more likely to have fixed views.

It would have been interesting to see how self theories would impact the results of the second study. People with incremental self theories may have been more likely to try again on the second essay. Or they may have taken that feedback on their comparative ability and used it as motivation to improve their writing on their own.