Next on my list: Re-Animator. One of the things I like about this movie is the cold open – it jumps right into the action. This tactic has been used in other horror movies and was perhaps most clearly spoofed in the opening for Ghostbusters. Dr. Gruber, an imminent researcher in brain death, is heard screaming in his office. When the police burst in, they find Dr. Gruber dying violently on the ground, as a young man in glasses hunches over him with a syringe. Dr. Gruber’s eyeballs explode and he dies, but the young man insists that he didn’t kill Dr. Gruber:

Flash to a young med student, Dan Cain, doing compressions on a woman in the ER. The doctor overseeing the case decides to use the defibrillator, which is unsuccessful at reviving the woman. As Dan tries to continue doing compressions, the doctor chastises the young man for not knowing when to give up, which “any good doctor should know.” BTW, any good doctor would also know that you don’t defibrillate someone in flat-line (or what the dumbass doc calls “straight line”).

As punishment for caring too much, Dan is told to take the woman down to the morgue. There, we observe Dan get a little jumpy around the dead bodies, and we once again see the young man from the first scene – who is introduced as Mr. Herbert West, a new 3rd year student. He speaks with a faux accent and calls another brain researcher, Dr. Carl Hill, a plagiarist. Nice guy.

Dan, who is not only a talented student, has also made the dean of the med school (Dean Halsey) like him, despite the fact that Dan is banging the dean’s daughter, Megan. Herbert interrupts their post-coital shenanigans to inquire about Dan’s need for a roommate. Though Megan immediately takes a disliking to Herbert, Dan accepts Herbert’s wad of cash and welcomes him.

During a lesson, Herbert takes his frustrations with Dr. Hill’s theories on brain death out on a couple of poor defenseless pencils. 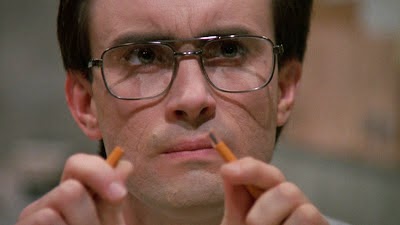 Later, we see that Dr. Hill is about as creepy as Herbert, except the object of his creepiness is Megan. Megan runs off for a “study date” with Dan and during said date, they discover Dan’s beloved cat, Rufus, dead in Herbert’s fridge. Herbert blackmails Dan into dropping it by threatening to tell the dean that Dan and Megan are sleeping together. Um, I think the dean kind of already knows, but apparently that worked.

Later that night, Dan awakens to find Rufus alive and pissed. Dan helps Herbert kill Rufus, and Herbert brings him back to life (again) to show the effectiveness of the “elixir of life” Herbert has created.

The howls of the cat were apparently so loud, Megan could hear it all the way at her house, because she inexplicably shows up and sees the Frankenstein-ian experiment.

The next day, when Dan tells the dean about the experiments, Dean Halsey expels Herbert, requests a written apology from Dan, and suggests that criminal charges may be filed. Nonetheless, Dan, the med student who cared too much, sneaks Herbert into the morgue to use the elixir on a human subject.

The experiment is a success, but the elixir turns the body into the Incredible Hulk, who attacks and kills Dean Halsey. Herbert decides that the body they used was dead too long and that they should use the elixir on a fresh body: Dean Halsey. Dean Halsey awakens, a little less hulk-y than the other guy, but still unable to speak and pretty pissed off. In a textbook case of medical conflict of interest, Dr. Hill takes Dean Halsey into his care, forces Megan to sign a consent form for exploratory brain surgery on the dean, and also tells her he is there if she’s ever feeling horny… er, lonely. ‘scuse me.

Dan confesses everything to Meg, while Herbert gets a taste of his own medicine (pun fully intended) when Dr. Hill blackmails him into telling him how we has been able to reanimate the dead. Herbert decapitates Dr. Hill and, not being satisfied with turning his head into a trophy with a nearby paper spike, decides to reanimate Dr. Hill’s head and body.

But Hill once again gets the better of Herbert, by directing his body (somehow) to knock Herbert out, and steal Herbert’s notes and serum. Meanwhile, Dan discovers Hill’s creep file on Meg, which consists of newspaper clippings, photos, and a lock of her hair. I don’t even want to know how he got that last one.

Somehow, Hill is a perfect reanimation, despite the disconnect between his head and body. (Apparently decapitation was the missing ingredient.) Not a speechless hulk, he can speak (hiss is probably more accurate a word), coach his brainless/earless body to perform tasks, and control Dean Halsey into kidnapping Meg and bringing her to the morgue. Because, apparently that’s where sick MDs like get to lucky. When Herbert comes in to stop Hill, and Dan sneaks in to rescue Meg, Hill unleashes his own undead army of reanimated and lobotomized corpses. Hilarity ensues.

No really. If this movie were to create a new genre of horror, it would probably be called zombie slapstick. My favorite would have to be when Hill’s intestine decides to strangle Herbert. 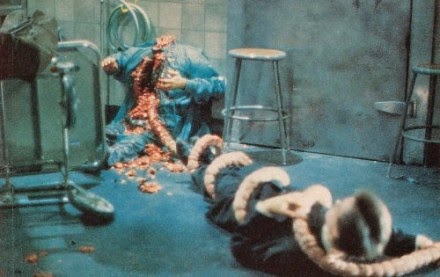 Dean Halsey sacrifices himself to help Dan and Meg escape, but Meg is strangled in the elevator by one of the reanimated corpses. Dan tries to save her with CPR, then carries her to the ER, where they try to bring her back to no avail. No wonder there is an army’s worth of bodies in the morgue – the doctors in this hospital apparently suck as reviving people. What, they never heard of intubation?

Fortunately, Dan had the time to grab some of Herbert’s elixir, and he injects Meg as the screen goes black.

So the movie is definitely ridiculous, but totally entertaining. The score is pretty good, especially for a horror movie. If you enjoy horror movies with equal parts comedy, you’ll definitely want to put Re-Animator on your list.