As I've said before (and here too), I love horror movies. So I've decided this October to spend my month watching horror movies in my spare time. I'll be honest - this probably won't be a horror movie a day, but it should add up to a lot of horror movies by October 31st. But why not spread the love around and blog about it?

First up in my month of horror movie viewing: Poltergeist, or what I like to call an extended metaphor for why TV is evil and destroying the American family. Also clowns are creepy.

According to Gestalt psychologists, we look for order and patterns, even in chaos. Perhaps this is why we have so many horror movies that use white noise and TV static. The static forms the basis of the ghostly visits, and also provides a venue for Carol Anne to speak to her family after she’s been taken. But I’m getting ahead of myself.

The movie begins with the TV going to static, then follows the family dog as he hunts for food around the house and visits its (living) occupants: Steven, Diane, Dana, Robbie, and Carol Anne. Things get weird when the dog wakes Carol Anne while hitting her up for food, and Carol Anne walks downstairs to carry on a conversation with the television, waking the rest of the family in the process.

Wacky hijinks with beer cans and children’s bikes, and fun with remotes show the normalcy – even mundaneness – of the family. In the meantime, the children get a lesson in life and death, when their bird Tweety dies, and they bury (him? Her?) in the yard. Carol Anne seems to be the only one genuinely upset about the ordeal, but quickly perks up when she asks for (and receives) a couple of goldfish. Still, it may be Carol Anne’s sympathetic nature that first drew the spirits toward her. We also learn about Robbie’s fear of thunderstorms, the creepy tree outside, and the even more creepy clown doll.


And of course, talking dirty in Donald Duck voice.

After the TV people reach out to Carol Anne again, and rush out of the TV and into the bedroom wall, things start getting weird. First, we get one of the most iconic lines in horror movie history.

The next morning, Robbie’s milk glass suddenly bursts and his silverware bends on its own. The family dog engages in an early canine form of TV people worship – perhaps the TV people are televangelists? And chairs move on their own.

Such rude houseguests – the first place they go after coming in uninvited is the kitchen.

The scares progress quickly after that. The creepy tree attacks Robbie, and while the rest of the family (minus Carol Anne) try to rescue him in the midst of a thunderstorm and black tornado, the spirits pull Carol Anne into the closet, where a bright light appears. The black tornado gobbles up the tree – which leaves me wondering, is the tornado part of the spirits’ manifestations? Something else? It kind of helped out the family, after all.

Who is the real hero of the movie? The tornado.

The family comes back into the house to find Carol Anne gone, and run around searching for her. Robbie, still shaken from the hungry tree attack, wanders into his parents’ bedroom, where he hears Carol Anne speaking through the TV.

The focus of the movie then becomes getting Carol Anne back. Steven goes to the local university to enlist the help of a parapsychologist (Dr. Lesh) and two other experts (Ryan and Marty) in… something, not sure what. But hey, they seem to know what they’re doing. The angry spirits in the house go out of their way to prove to the three academes that they exist, even moving things around when one deigns to say, “We don’t know if your house is actually haunted.”

The group stays in the house to continue investigations. Marty, apparently after discovering Steven and Diane’s pot stash, has some major munchies, and ventures into the kitchen, where the spirits have staged an intervention to curtail his overeating.

The spirits also trick Marty into believing he has ripped half his face off. That was far less helpful, as Marty refuses to return. The plot thickens as we see 1) a bunch of ghostly men and women parading through the living room, 2) Dr. Lesh tells Diane she’ll be back with some help, and 3) Steven’s boss shares that they’re moving a cemetery for the next division of homes and that they’ve done it before, down in the valley. Hmmm, that might be important information. We also learn that Carol Anne was born in the house.

So then Dr. Lesh comes back with Tangina Barrons, the best maid in town.

Unfortunately, she apparently didn’t share her whole plan with Steven. When Diane had gone into the light to get Carol Anne, and Tangina started telling the spirits to go into the light, he freaks out that she’s sending his loved ones into the light and tries to pull them out. And that’s when he gets a visit from a giant head.  Not Wizard of Oz head, more like face of a half-decayed demon skeleton head thing.  What, you want a picture?  Fine, here. 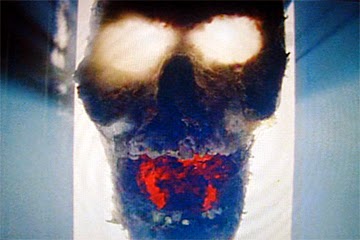 Terrified, Steven drops the rope.  So much for “never” letting go.

But things turn out okay as Diane and Carol Anne fall from the living room ceiling.  The family is whole again, Tangina declares the house clean, and everyone is happy. Except the family decides to move out and Steven tells his boss to go to hell. Little did any of them know that Tangina didn’t quite clean the house, because the scary beast guy is still there, and he’s pissed.

What happens next is incredibly scary, especially for anyone afraid of clowns, never-ending hallways, spidery ghost thingies, and jumping coffins. 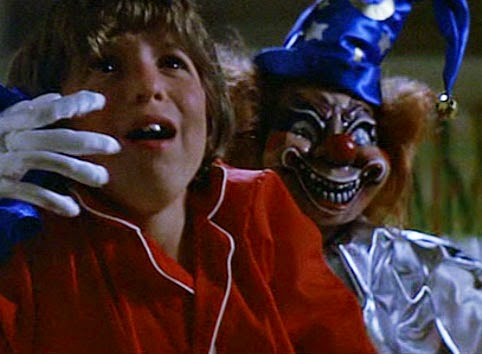 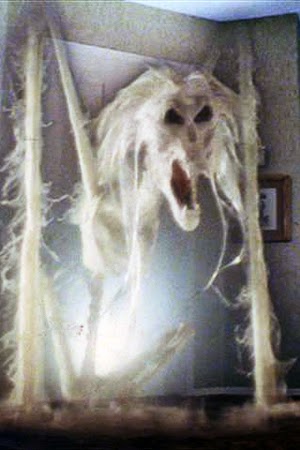 It also shows that the beast was going easy on the family up until then, because he could have easily disposed of all of them if he had wanted to.  Instead, he attacked when they were a little more prepared.

Oh yeah, and we learn the real kicker of the story - when they "moved" the cemetery, they only moved the headstones. The bodies remained.  Hmmm, wouldn't they have noticed (and had to move them) when digging down the foundation?  But I digress.

Fortunately, the problems are solved when the house is strangely pulled into the light as well. Or maybe the tornado just saved the day again. The family checks into the hotel, promptly removes the TV from the room, and the credits roll.

Despite my jokes, this is one of my favorite movies.  I remember being terrified the first time I saw it, and it still creeps me out every once in a while.  But I love every minute of it.