Earlier today, I finished My Dark Vanessa, a debut novel by Kate Elizabeth Russell. The book is told by Vanessa Wye, a young woman who was abused by her boarding school English teacher starting when she was 15. The book spans 17 years, jumping between Vanessa's youth and adulthood. Before I get into my (slightly spoiler-y) review, I want to say: I loved this book, and I also have no desire to ever read it again.

As you can imagine from the title and brief synopsis, this a difficult book, as we hear everything that happened in the mind of a young woman who was gaslighted into believing she had all the power in situations when she had almost none and at the same time, that she had no power in situations where she could do something to stop the abuse. It's a deep and disturbing dive into the way an older man selects and grooms his victim, changing her thinking and behavior for decades, and convincing her that she's a willing participant, even when she describes very clear dissociation (being outside of herself) during the episodes of abuse - a reaction often seen in victims of child abuse.

The book also digs into two really key issues, that I haven't often seen explored or explored this well: 1. The narrative that women have "feminine gifts" that allow them to have power over a man, and make these men do things they wouldn't otherwise do. And 2. That coming forward is the only responsible thing a victim of such abuse can do.

The first issue (the "power" of femininity to take away men's agency) is such a pervasive part of rape culture. But this book also explores how this narrative has been romanticized to even apply to situations of a very young girl and a much older man, in stories like Lolita, American Beauty, and Pretty Baby. It is this romanticization and narrative that makes Vanessa continue her relationship with her abuser, Jacob Strane, even when it actively hurts her. He convinces her that he has so much more to lose than she does if their "love" becomes public, that he cannot help himself, that she has the power in the situation to consent or decline (even when he ignores her requests for him to stop and/or fails to ask for consent for very extreme sexual acts), and that, most of all, she is special because of this power she has. For a lonely girl, away from home for the first time, it's so easy to see how he selects and grooms her. But perhaps one of the most frustrating things is, even as I was reading and feeling what Vanessa feels, the descriptions and behaviors were so clear, I would shout at her as I read that there's some textbook-level gaslighting going on. It's why this is such a good book - that the author can give us those really clear cues while still telling the book in first-person, and avoid the "unreliable narrator" trope - and also one I hope to never read again.

This narrative of feminine wiles is perhaps ones of biggest issues we need to contend with if we want to do away with rape culture for good. It's a narrative that, on its surface, appears to assign all the power to the woman and none to her rapist or abuser, when at its core, it instead makes the woman powerless to stop (and deserving of) whatever harm is done to her. It's also a narrative that can be so easily spun as a positive thing when it is actually toxic and harmful.

The second issue is a bit more ambiguous, at least for me, because before I read this book, I would have agreed with this second statement, that victims must come forward so that the abuser can be brought to justice and that others can be protected. I believed this even as a person who did not bring my own rapist to justice, something I was very ashamed of about myself. But this book made me realize just how tricky this issue is.

Framing it as needs of the individual vs. needs of the many oversimplifies exactly what the needs of the individuals are (privacy, self-care, fear of reprisals, and so on), while also making that individual an accomplice in how another person's actions affects the many. In the case of adults in positions of power abusing the people they should be protecting, no victim should ever be to blame; this is on the system that put (and often helps to keep) that person in power, and on all of us, for the ways (big and small) that we may contribute to these power dynamics and rape culture.

This book was very triggering for me (even though my personal experiences do not resemble Vanessa), and I'm still working through the emotions it's brought up. I was reminded of a book I read in college, Bastard Out of Carolina, which also details years of sexual abuse of a child. When I finished that book, I threw it against the wall. Fortunately this book didn't elicit that reaction, but I didn't have a super-positive reaction to the ending either.

I'm still glad I read it, though I probably wouldn't recommend it to anyone who might also be triggered, especially if they haven't been able to work through their own trauma through therapy or treatment. And I'll definitely keep an eye out for future books by Kate Elizabeth Russell. 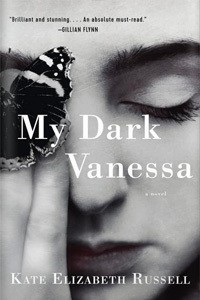