Totally Superfluous Movie Review: Alien Resurrection - and Why It's Actually an Early Version of Firefly

After working on a few things around the house last night, I decided to settle in with a movie as I waited for my husband to come home. I looked through my (probably) hundreds of DVDs and Blurays, and just couldn't find anything I was really dying to watch. Then I remembered that I received the Alien movies in a Bluray box set for Christmas last year. I'd watched Alien and Aliens not too long ago, so I didn't feel like watching them again. I occasionally break out Alien 3 just for continuity's sake (not a great movie, but watchable), but never ventured as far as Alien Resurrection.

I actually have only seen Alien Resurrection once - when I saw it at the theater on one of my first (and only dates) with my first high school boyfriend. I don't remember enjoying it very much, and I generally enjoy these types of movies. To paraphrase Ash from the first movie, "I admire their purity." They are what they are without any pretense. So I decided it was time for another viewing.

First off - holy crap, this movie was written by Joss Whedon?! How did I never know this before?! And the whacky crew of the Betty? That would be Firefly version 1.0. Seriously. I'll get back to that later. But here's more realizations in a sort of play-by-play as I watched the movie. (Spoilers ahead.)

The scientist performing the surgery at the start of the movie? That would be Gríma Wormtongue from Lord of the Rings: The Two Towers (and the extended cut of Return of the King). The actor, Brad Dourif, was also Billy Bibbit in One Flew Over the Cuckoo's Nest and Chucky in the Child's Play movies. Dude, my Kevin Bacon game just got a lot more formidable.

Ripley and Sarah Connor from the Terminator movies are definitely cut from the same cloth. Ripley was arguably a bit tougher at the start of the adventure, but still - these two characters have a similar progression from, "Oh, I guess I have to fight" to "Mess with me, and I'll bust your kneecaps with my big toe." The scene where Ripley attacks the scientist while handcuffed reminded me of Sarah's interactions with her psychiatrist in Terminator 2.

And now the crew of the Serenity - er, Betty: First up, Captain Frank Elgyn, who like Mal is a gun-for-hire. However, whereas Mal is moody but honorable, Elgyn is just sleazy. I don't think anyone is that upset when he's killed off.

Co-pilot Sabra Hillard is kind of a mash-up of Zoe (in the devotion to her captain sense) and Inara (in the love interest sense), but take away any opinions or motivation other than pleasing her man. While the movie itself would pass, I don't think Hillard's character would pass the Bechdel test by any stretch of the concept.

Mechanic Vriess is kind of similar to Wash, in that he lends some goofiness to the story, but has a few attributes of Kaylee as well.

Johner is like a meaner, slightly more violent version of Jayne. The similarity is pretty striking, though. I bet on some distant world, he's celebrated as a folk hero, with his own statue and theme song. He just needs this hat and he's there: 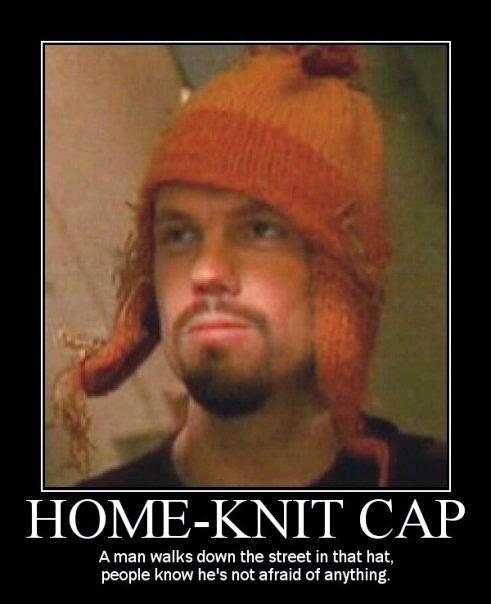 Finally, Annalee Call (played by Winona Rider) is very similar to Kaylee. She's also the final step of the complementary synth progression process that inverts Ripley's badass progression. You see, as Ripley gets more and more badass across the movies, the synths get more and more agreeable and weak.

Movie 2: Ripley battles the alien queen with a loader, Bishop saves the girl after he was ripped in two and also makes some cheeky comments about humans.

Movie 3: Ripley is the honey badger of the movie, Bishop is unable to even get sympathy for being little more than a bust and begrudgingly complies to Ripley's demand that he recover data from the flight recorder.

BTW, the only reason Alien Resurrection passes the Bechdel test is because of Call and Ripley. Oh yeah, and the subject of their conversations, these guys:

And then there's Purvis, one of the Alien hosts, played by Leland Orser, who has a penchant for playing guys found as a quivering mess of collateral damage from the actions of the bad guy. If you seriously want to talk about type-casting, check out this guy: he's doomed to play his character from Se7en over and over again (he was the collateral damage of the "lust" murder).

Overall, there are definitely some issues with Alien Resurrection, not the least of which is the previously mentioned Bechdel results. It's kind of surprising to me that Joss wrote this, given some of these issues, like the annoying "Careful" warnings of Wren that are more likely to cause Dr. Gediman to slip and kill both Ripley and the Queen than anything else. Or the triteness of the dialogue from General Perez. Or the stereotypical throw down that results from Johner trying to make the moves on Ripley, that are more a thinly veiled attempt to show her badassedness than a display of true human behavior.

To be fair, the concept of writing credit in Hollywood is different from what I tend to deal with in academia - in my field, with some exceptions, the person who does most of the writing gets the most credit (being listed first), and people who do less writing get less credit (being listed after the first author). In Hollywood, the person who gets writing credit may have only done the first draft, which could be substantially rewritten by the time it gets to the final cut. One reason for this exception has to do with writing contracts. Depending on what is in the contract, a rewriter's only reimbursement for his/her time may be monetary, and he/she may not ever be listed as a writer in the opening credits. While rewrites are presumably to improve a script, they may also reduce the quality (see the Buffy the Vampire Slayer movie as an example). So it's possible that the script Joss gave them is very different from what I watched last night.

That being said, the Firefly similarities definitely scream Joss Whedon. The Betty/Serenity crew similarities, the Alien/Reaver similarities, even the message of the film are signature Joss. As I've discussed before, one big message I saw in Buffy is that the monster is often ourselves. While the Aliens are terrifying bad guys with a mission to destroy other life, the true bad guys of the movie are even worse:

As Ripley and the survivors try to escape the ship, they happen upon a room containing previous Ripley clone failures. And when we saw the final Alien queen, capable of giving live birth (as Dr. Gediman calls, "perfect"), we realize that the multiple clone experiments were not to recreate the perfect Ripley, but rather, the perfect Alien. The final ("successful") Ripley clone is merely a side effect of those attempts. Even more, though they did surgically remove the queen from Ripley, allowing her a chance at survival (and after the revelations I just described, I wonder why they even bothered), they certainly did not offer that possibility to the human cargo sold to them by faux Mal.

While you could argue there is also a pretty literal demonstration of "we are the monsters" in the final Alien hybrid: 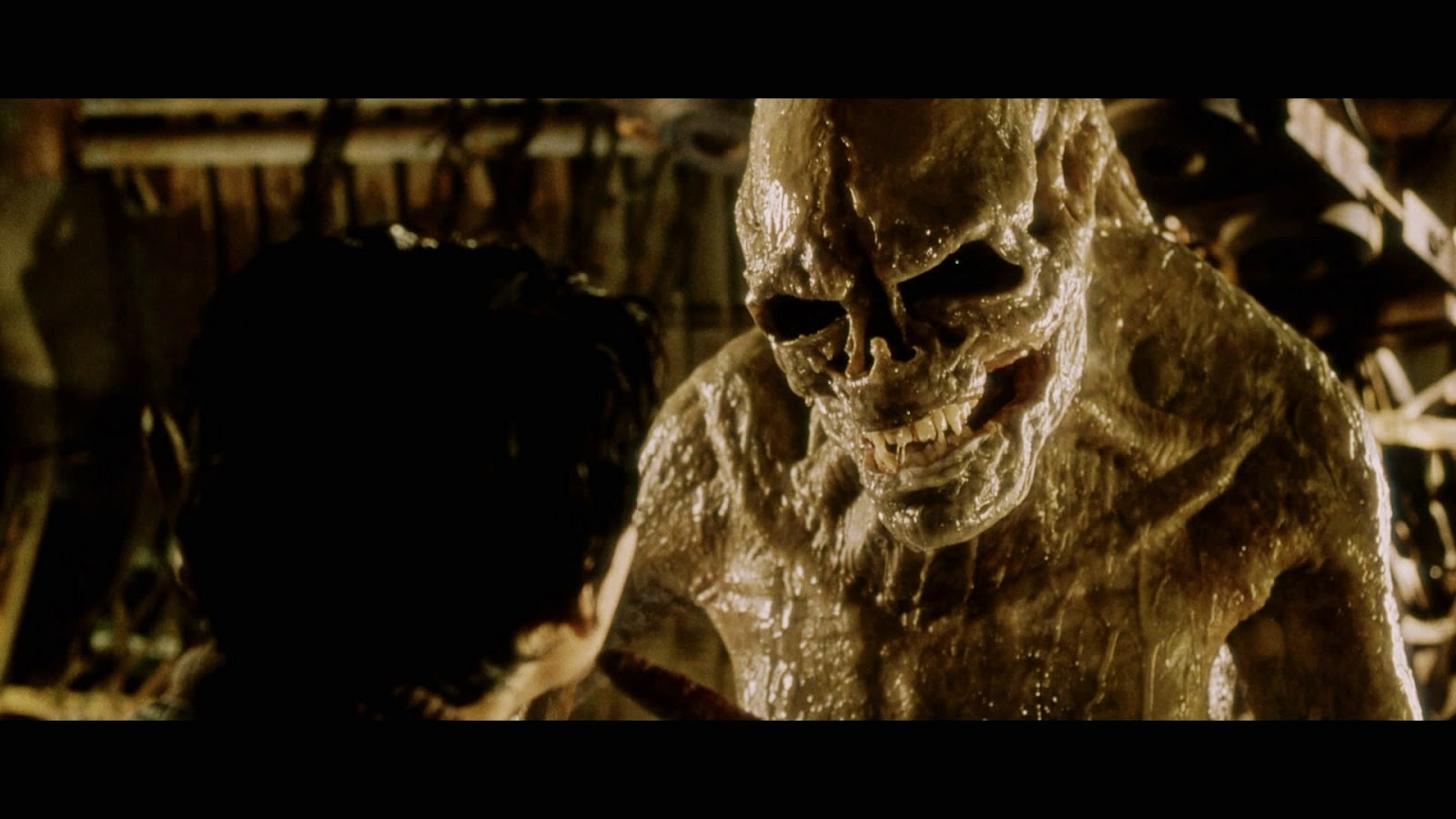 throughout the movie, the real monsters are the people. In fact, even in more pure instances of Whedonverse, the super powered bad guys aren't the real monsters. The human beings who make the decision to turn to darkness are much more maligned. Ripley's response when we learn that Call is a synth is probably the most telling: "No human being is that humane." Ripley, who has witnessed - and been a unwitting victim of - more of the dark side of humanity than anyone else, has no more love for this sorry species.

Final verdict - I think if I ever get the urge to watch this movie again, I'll just watch Firefly instead.
by Sara at 2:27 PM